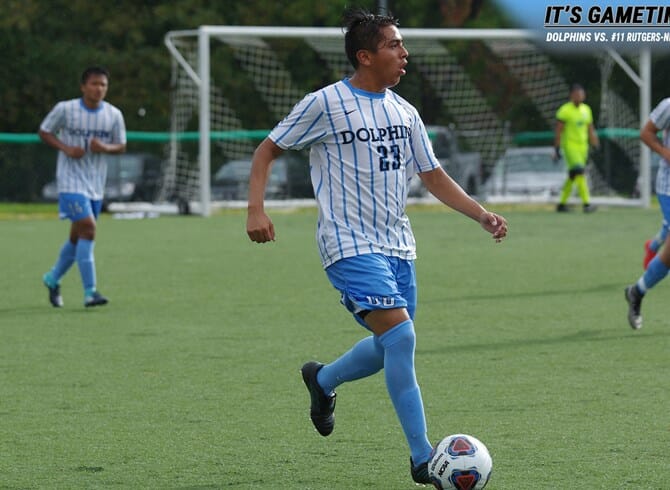 The College of Staten Island men’s soccer team will look to keep their win streak alive this afternoon when they host #11 Rutgers-Newark at 4:00 pm at the CSI Soccer Complex.

CSI vs. #11 RUTGERS-NEWARK AT-A-GLANCE
Matchup:  CSI (8-1) vs. #11 Rutgers-Newark (9-0)
Where: CSI Soccer Complex – 2800 Victory Blvd, Staten Island, NY 10314
All-Time Series: RUN leads 13-5-3
Last Meeting: September 14, 2013 – RUN won, 7-0
Players to Watch (CSI): Omer Abdella picked up his first start of the season against Medgar Evers over the weekend and made the most of his start.  Abdella scored the only two goals of the game and it only took two shots to do so. On the year, freshman forward, Bryant Navarro leads the Dolphins with five goals on 17 shots. Ivan Barreraserao has been outstanding between the pipes for the Dolphins, posting a 5-0 record on the year with three shutouts. Defensively, Erick Conde has played well this season while posting the most minutes on the team with 749.
Players to Watch (RUN): Fabio De Sousa leads the Raiders with seven goals on the year, placing him in the top 15 of the country in scoring. The reigning first-team All-American will look to extend his scoring streak to four in a row this afternoon at the CSI Soccer Complex.  In goal for the Raiders is Andres Medina.  Medina has allowed just one goal all year while facing 43 shots and having to make 10 saves. Hubert Dul is the facilitator on the pitch and leads the team with three assists.
News and Notes: The Dolphins come into today’s game on an eight-game win streak and haven’t allowed a goal in 180 minutes.  The Raiders have stifled opposing offenses in the past four games, posting shutouts in all four of those games.  Although Staten Island has just five wins against Rutgers-Newark, four of them came at the CSI Soccer Complex with the last one coming in 2001 by a score of 2-1. This series has been dormant since 2013, a game that saw the Raiders win by a score of 7-0. These teams have a common opponent in City College of New York with both teams earning a shutout win against the Beavers.  Rutgers-Newark is in the top 3 in the nation in goals allowed at 0.11 while the Dolphins come in as the 18th highest scoring team in the nation with 3.38 goals per game.