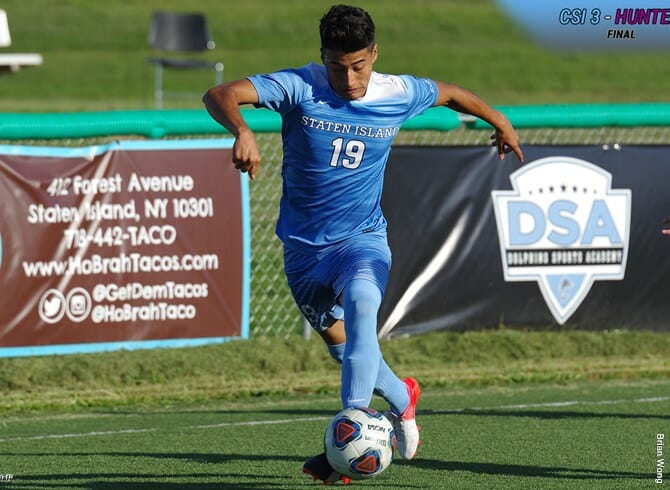 The College of Staten Island men’s soccer unit broke up a three-game slide this afternoon, using two late second half goals to help secure a 3-1 win over Hunter College in a CUNYAC contest played at Randall’s Island.  The Dolphins moved to 9-4 overall and 4-2 in the conference with the win, while Hunter’s struggles continued, falling to 2-9, 2-4, respectively.

Poor starts have plagued the Dolphins in recent games, but that was not the case in this one as the Dolphins blazed out to an early edge.  After a Philip Lefkowitz shot was saved by Hunter keeper Noah Dougherty only 1:20 in, CSI made good on their next attempt.  Earning a corner, Lefkowitz did the honors, and placed a great cross in to Ryan Layman, who slammed the ball home to give CSI a 1-0 edge just 2:07 into play.

CSI would not register another shot until the 15th minute, but they continued to steady play and limit Hunter chances.  The Hawks would get off three more shots but to no avail, and at the end of the first 45, CSI had a 1-0 lead at intermission.

The Dolphins’ defense would continue to stymie the Hawks in the second frame, but the home team made good on its only shot of the stanza.  Just 7:34 into the frame a cross from the right from Jesus Patino Muniz found an open Mikey Tzanetatos, who delivered the equalizer passed CSI keeper Ivan Barreraserao to make it 1-1.

Hunter would not get off another shot and CSI then devoted a lot of time into Hunter’s end of the field.  Shots were at a premium but in the 69th minute Bryant Navarro was able to turn on a turnover, chipping a short shot over Dougherty to stake CSI to a 2-1 lead with just over 20 minutes to play.

A pressing Hunter side then invited the CSI counterattack, and with just over 13 minutes left, Breny Salas posted his first career goal, gathering another turnover and then going in alone on Dougherty for the score to make it 3-1, putting the game out of reach as CSI out-shot Hunter, 11-1, in the second frame.

CSI led the final shot count, 18-5 (11-3 on goal) holding a 4-3 edge in corner kicks.  Dougherty made eight saves in defeat while Barreraserao posted two saves in the win.

With their three game skid in the rear view, CSI will look to keep up the momentum when they travel to Stevens Institute of Technology next Wednesday at 4pm in Hoboken.