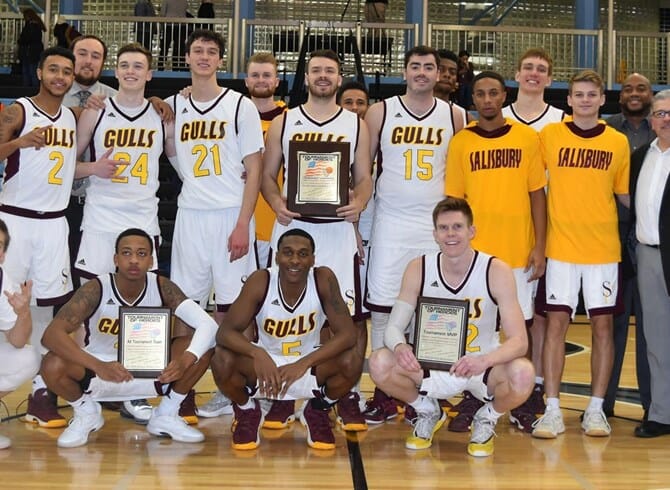 The College of Staten Island men’s basketball squad saw a second-half lead evaporate, falling to Roanoke College in the Consolation leg of the 16th Annual CSI Tournament of Heroes this afternoon, falling to the visiting Maroons, 77-73.  Following the victory by Roanoke, Salisbury University avoided a feverish comeback by Oneonta to claim the Championship, with a 65-61 win to cap tournament play this afternoon.

GAME ONE – ROANOKE 77, CSI 73
In a game that featured 12 ties and eight lead changes, it was the visiting Maroons that were able to outlast the Dolphins in the end, lifting the visitors to 8-4 overall, while the Dolphins fell to 4-6.  An 8-2 run in the early stages by the Dolphins saw then take an early, 10-7 lead, capped by a Christian Taylor three-pointer.  CSI kept the lead until a C.J. Miles three-point play gave Roanoke a 15-14 lead.  The lead would grow to double figures when Josh Freund converted on an interior drive following a CSI turnover, and Roanoke would take the game’s largest lead at 35-24 with 3:50 to go in the opening session on a Caleb Jordan lay-up.

CSI answered with eight straight points, including consecutive three’s by Raymond Savage, and after a pair of Roanoke freebies, the Maroons nabbed a more modest 37-32 advantage at the half.

Seven straight second-half points forced the first of six second-half ties for CSI at 39-39, and later in the second frame, a 12-4 CSI run, highlighted by two-straight Jade Spencer jumpers and another pair of jumpers by Taylor, the last a three, made it a 59-54 game in favor of the Dolphins with 10:09 to play.

Roanoke fired back with an 11-2 answer to swing momentum back, helped by back-to-back three’s from Jorden Davis and C.J. Miles.  Roanoke led from there until CSI forced a 69-69 tie with 4:40 left, but a made lay-up by Josh Freund and two Joey Miller free-throws gave Roanoke the lead for good.  Up 75-73 with 48 seconds left, Miles hit a critical jumper as the shot clock was expiring to give Roanoke a 77-73 lead with 22 seconds remaining.  CSI would follow with a miss from in close, and despite a Roanoke turnover could not support a comeback, as the Maroons held on in the closing seconds.

GAME TWO – SALISBURY 65, ONEONTA, 61
Wearing their home uniforms the Seagulls led nearly wire-to-wire in the championship showdown with Oneonta, but saw their 13-point second-half team evaporate before pulling it out late at the free-throw line.  The Seagulls improved to 7-4 with the win while the Red Dragons fell to 7-4.  It was the first-ever meeting between the two sides.

A Kevin Mackin three for Oneonta gave the Dragons an early 3-2 lead, but a three-point response by Chad Borcikowski and then a lay-up by J.P. Krotulis set the stage for a Salisbury-dictated first half the rest of the way.  Twice, Salisbury extended to eight points before they would take their first double-digit lead at 4:49 of the first at 23-13.  Both teams struggled mightily from beyond the arc, but the Seagulls were buoyed by a healthy 14-4 edge in turnovers, helping them to a comfortable 33-25 edge at intermission.

After Oneonta cut the lead to four in the opening stages of the second half, Salisbury pulled ahead and the teams traded baskets.  The pivotal run came at the 10:47 mark, as the Seagulls pulled out a 7-0 run to take a more commanding 49-36 edge, a run that featured another two buckets by Krotulis and a three-point bomb from Borcikowski.  But the Red Dragons refused to go away, and shortly after, the team cut the lead to just four on a Carson Jacobs three.  After Blair Davis responded for Salisbury with a three, Anthony Kirkwood fired in another for Oneonta, setting the stage for a frantic ending.

At 4:48 Mackin hit another three to cut the Salisbury lead to 59-55, and following a miss, Kirkwood slapped in another three to make it 59-58.  Davis converted a layup but again Oneonta cut the lead and then tied it when Kirkwood completed a three-point play.  That tied the score at 61-61 with 1:52 to play, but unfortunately for Oneonta they would not score again.  Both teams missed open lay-up attempts on trips down the floor and then with 55 seconds left, Borcikowski tickled twine on two free-throws to make it 63-61.  The Dragons would miss a three on the next possession but got the ball back via a turnover with 12 seconds to play and a chance to win or tie the game with the final shot.  They weren’t able to take one, however, as Matthew Boyd fumbled the entry dribble into the paint, giving it away and Davis followed up with another pair of free-throws to put the game out of reach, giving Salisbury the Championship.