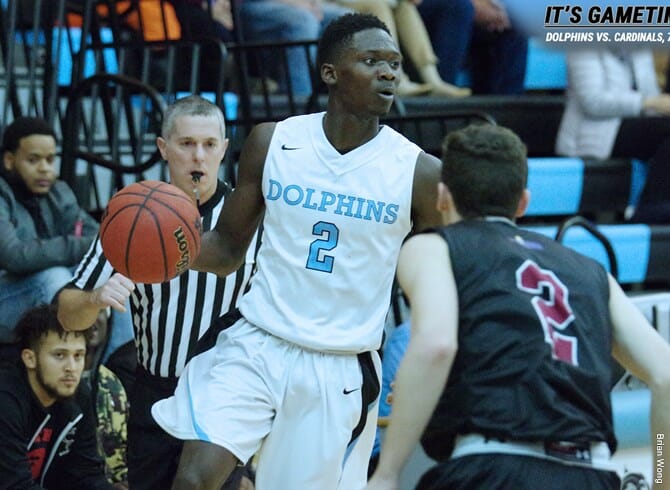 The College of Staten Island men’s basketball team is coming off of a big road win this weekend and now will look to do it again when they travel to Jamaica, NY, to take on York College in a CUNYAC showdown.  The Dolphins snapped their three-game skid on Saturday with a resounding 77-64 win over John Jay, meanwhile, the Cardinals will be looking to bounce back from a nail-biting, 77-74, loss to Baruch College in their conference opener.

CSI vs YORK COLLEGE
Matchup: College of Staten Island (2-4, 1-0 CUNYAC) vs. York College (1-4, 0-1 CUNYAC)
Where: York College Gymnasium – 94-20 Guy R. Brewer Boulevard, Jamaica, NY
All-Time Series: CSI leads 64-23
Last Meeting: January 28, 2017 – CSI won 101-84
Players to Watch (CSI): The Dolphins’ balanced attack is being led by Christian Taylor’s 14.3 points per game and 6.5 rebounds per game.  Fellow backcourt star Adeola Latunji is the team leader in minutes logged with 30.7 minutes per contest.  His 13.3 points per game rank second on the team, putting up 4.3 rebounds per game as well.  Senior Edin Bracic is slated to make his fourth start of the season tonight, and look for him to be a factor behind the arc.  Rudy Lavanture is another sharp-shooter to look for, leading the way with six three-pointers in just 12 attempts.  Look for Jade Spencer to be a big x-factor tonight.  He is coming off of his first double-double of his career against John Jay and leads CSI defensively with six blocked shots.
Players to Watch (YC): York is getting great contributions scattered through the lineup in a balanced attack.  Edwin Sainvil leads the way with 13.2 points per game, adding seven three’s and a team-leading 19 assists in the backcourt.  Jean Joseph is next up with 12.6 points per contest.  He is registering on 48% of his shots and posts 4.8 rebounds per game as well.  Interior power Ryan Smart is averaging a double-double with 12.2 points and an even 10 rebounds per game and leads the way with an even 30 minutes per game of action.  Not to be out-shined is Darin Dove, who leads the team with 12 three-pointers, powering him to 10.2 points per game.
News & Notes: CSI and York have been meeting since 1978, and the Dolphins have a rather commanding lead in the series, 64-23.  They have been able to rattle off four-straight over the Cardinals and have also won 12 of the last 13 in the series set.  That recent run has included a 6-0 mark by the Dolphins in Jamaica, NY, where CSI sports an overall record of 27-10 all-time.  In their last meeting, CSI scored a 101-84 win over the Cardinals, marking the highest-point output they have had against York since 1988, a 102-83 win in Staten Island.  In last year’s meeting, Bracic was among the scoring leaders with 17 points on 7-11 shooting in 32 minutes of action, adding five steals defensively.  Jean Joseph made his impact felt with a game-high 22 points and 10 rebounds.  Despite their 1-4 overall record, York is 1-0 on their home floor, winning 88-80 over Stevenson University on Nov. 21.  CSI has been on the road a great deal, going 2-3 on unfamiliar territory.  CSI is holding its ground defensively.  They are ranked 64th nationally in blocks per game and 53rd in steals per contest.  They are also holding opponents to just 28.4% from beyond the arc, doing a good job of contesting the three-pointer.  For York, they pride themselves on rebounding, and they average 42.6 per game, good for 58th of 415 ranked schools.  That includes 13 offensive boards per contest which are in the top quarter of the NCAA this year as well.