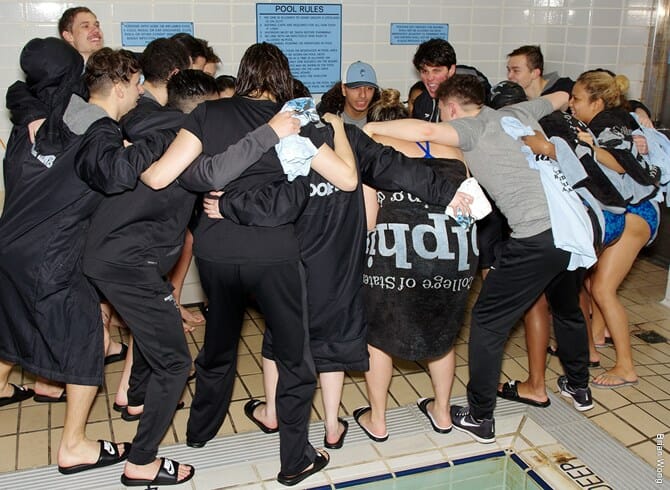 The College Swimming and Diving Coaches Association of America (CSCAA) has announced the 688 teams that have earned the distinction of Scholar All-America team for the Fall 2017 semester, and both the College of Staten Island’s men’s and women’s swimming & diving units were among the honorees.  The teams represent 430 institutions from across all NCAA, NAIA and NJCAA Divisions.  To earn the honor, teams were required to post a GPA of 3.0 or higher for the Fall Semester.

For the CSI women, they have been making quite a habit of being selected as an Scholar All-America team.  The fall semester marks their fifth-straight time appearing on CSCAA’s list.  The cumulative Team GPA of the team in the fall semester was 3.30.  They have also brought home CSI’s Team GPA award given to them at the school’s end-of-year banquet, topping out with a cumulative 3.38 GPA a year ago. As for the CSI men, they achieved a total GPA of 3.19.

“It is great honor to see both of my teams to earn academic honors. It shows that they are not just here to work hard in the pool but also work hard in the classroom and towards life after swimming,” remarked Head Coach Michael Ackalitis. “Just like when they work on their times throughout the season in the pool they push and motivate each other in the classroom and are always willing to help each other out.  There is no doubt that each team member will find individual success after college.”

The 688 teams, representing 430 schools, are the most ever to be named in the fall semester, according to the CSCAA.  CSI was one of just two CUNYAC schools to be cited and the only CUNYAC institution with both men’s and women’s teams cited (Hunter College women were the other).