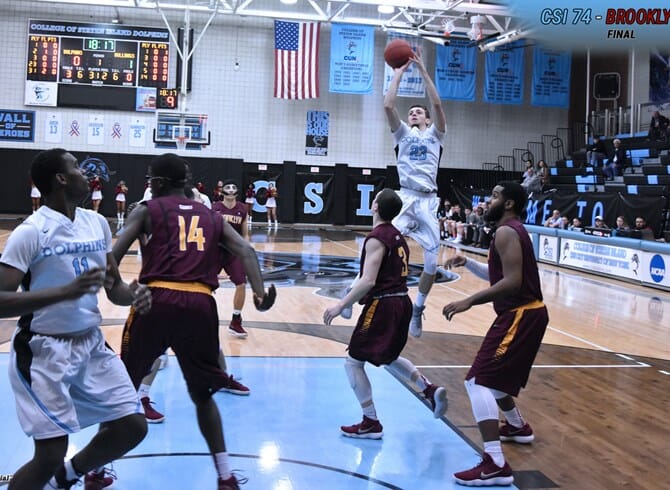 Staten Island, NY | A three-pointer by Edin Bracic with just over 12 seconds to play coupled with a record-setting block from sophomore Jade Spencer as time expired gave No. 3 College of Staten Island a thrilling, 74-73, win over visiting No. 6 Brooklyn College as part of CUNYAC Postseason Tournament play at The Tank this evening.  The win lifted the Dolphins to 15-11 overall, and advanced the Dolphins into the CUNYAC Semifinals, where they will play No. 2 Baruch College at 8pm on February 21, at the Nat Holman Gymnasium at The City College of New York.  Brooklyn finalized their season at 7-19.

Both teams claimed double-digit leads in this one, sharing a total of 13 lead changes en route to the frantic finish, one that saw Brooklyn control the basketball for a final play.  A Ben Batash driving lay-up attempt however was stuffed by Jade Spencer, the sophomore’s seventh block of the game, tying a CSI single-game record, and CSI was able to converge on the loose ball as time expired to seal it, punching the defending-champions ticket to the semifinal round.

Spencer was a huge factor in the game, coming in to play big minutes as CSI was whistled for the game’s first five fouls, putting Robert Rossiter and Adeola Latunji, CSI’s second and third leading scorers this season into immediate foul trouble.

“I just had to go out there and play hard,” said Spencer after the game.  “My coach needed me, especially to play defense, because that’s my strength.   Brooklyn played their best tonight.  Tonight’s win sets a good tone for us and we have to continue to work hard and be at our best.”

Before the heroics late in the game it was CSI that was able to pull ahead despite their foul woes.  A 10-0 run, powered by three’s from Bracic and Raymond Savage and jumpers by Christian Taylor and Latunji put CSI up, 16-10, after the game’s first eight minutes, and CSI extended to 27-17 three minutes later thanks to another set of Bracic and Taylor jumpers.

From there, however, Brooklyn battled back, scoring a numbing 14-0 run, to grab a 31-27 lead.  Daniel Shulman started the run with two jumpers, the first a three, while Batash added  seven points, including a baseline three.  The lead would hold, as BC would ultimately take the same four-point lead, 40-36, into the locker room, going in on a head of steam thanks to a buzzer beating three from Alpha Bah.

That momentum translated to the second half, as BC raced out on an immediate, 7-0, run as Niv Konfino skated in for a layup and then drained a three.  Twice BC matched the lead, the final time at 52-41 with 15:27 to go.  In what could be considered a turning point of the game, however, BC could not build on the lead, despite three straight CSI attempts to cut into the lead turned up no points.  Finally, at 14:00, Stephen Flagg connected on a three that awoke the Dolphins from their shooting funk, and the race to eliminate the deficit was on.

A lay-up by Taylor with 11:52 to go cut the BC lead to five, and then later, two three’s from Savage did the same.  With under seven minutes to play, a free-throw followed by a Latunji mid-range jumper cut BC’s lead to just one, 64-63, and after a BC turnover and then a miss, Taylor popped in a short jumper to give CSI their first lead of the second half, 65-64, with just 5:17 left.

Both teams did grow cold from there, until a Batash bucket put BC up, 69-67, but Taylor answered the call again to tie with 1:34 left.  Brooklyn’s Maynard Grant IV sank two free-throws on the next possession, but Latunji broke in for a lay-up on the other side to tie again with 55 seconds to go.

BC again got to the line with 28 seconds to go, and after nailing the pair it was time for CSI to set up a chance.  With 22 points already, the ball was in Taylor’s hands, and the sophomore waited for the double-team to present itself before popping the ball over to Bracic, who drilled a three from the right side of the arc to give CSI the 74-73 lead with just over 12 seconds to go.  The assist by Taylor was his 10th, giving him his first career triple-double (22 pts., 12 rebounds, 10 assists).

“We have great shooters so I just wanted to drive and dish.  Edin has plenty of confidence in his shot and he just made it,” Taylor commented.

With one last attempt to go, BC put the ball in Batash’s hands, and the slasher was able to cut inside to put up a lay-up but Spencer was there as he was all game to make the block, as both Taylor and Savage converged on the loose ball as time expired, capping the thriller.

“We just played with a lot of poise,” said Taylor.  “We practice these situations all the time and I think we felt really comfortable at the end and we found a way to get the win.”

The win was the third by the Dolphins over the Bulldogs this season, and CSI improved to 5-1 all-time over BC as part of CUNYAC Tournament play.  This was their first-ever meeting in the quarterfinal round.  The win will pit CSI against No. 2 Baruch in the CUNYAC’s Semifinal Round played at CCNY on Tuesday at 8pm.  It will follow the first Semifinal round matchup between No. 5 John Jay College and No. 1 Lehman College.  John Jay was an 88-77 winner over No. 4 Hunter College earlier in the afternoon.