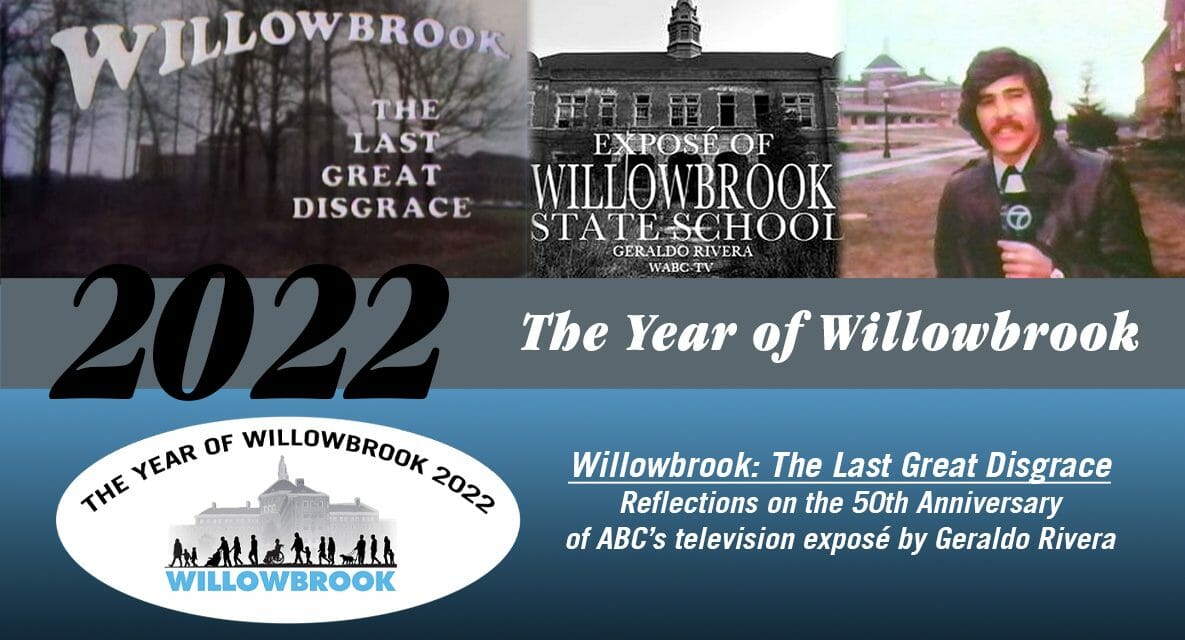 In recognition of the 50th anniversary of the original broadcast and as part of the 2022 Year of Willowbrook at the College of Staten Island, the Willowbrook Legacy Project will present an evening of reflection and discussion with Geraldo Rivera, entitled Willowbrook: The Last Great Disgrace, Reflections on the 50th anniversary of ABC’s television exposé.  The event, open to all who wish to attend, will be hosted by Ken Iwama, former CSI VP of Economic Development, Continuing Studies, and Government Relations, now Chancellor of Indiana University Northwest, on Wednesday, February 16, at 6pm, virtually through Zoom.

The Year of Willowbrook’s signature event for the month of February, the evening will Include a showing of the powerful and unsettling original broadcast of Willowbrook: The Last Great Disgrace, remarks from Rivera and an open conversation among Rivera, Iwama, Bernard Carabello and Eric Goldberg about what Willowbrook: The Last Great Disgrace has meant for the Willowbrook community and for Rivera himself.  Carabello joins the panel as a former Willowbrook resident, disability rights activist, founder of the Self-Advocacy Association of New York State, and recipient of an honorary doctorate of humane letters from CSI/CUNY, while Goldberg  is an IDD self-advocate, co-chair of the SIDDC’s Willowbrook Committee, and Willowbrook Legacy Committee member. The event will also feature an audience question and answer segment with Rivera.

Rivera responded to a call 50 years ago from doctors and social workers at the Willowbrook State School to report on the appalling conditions under which its residents lived. He and his crew captured footage in that clandestine visit to the School that became the explosive and honest exposé.

When Willowbrook: The Last Great Disgrace aired nationally, viewers were shocked to see residents living in squalor with little access to comfort or care, the result of years of budget cuts that had left the once-model institution overcrowded and understaffed. The public outcry led to a Consent Judgement in the New York courts that ordered the closure of Willowbrook and became a key precedent establishing that Willowbrook residents had a constitutional right to be protected from harm.

Registration for the event is open.  The event will be live online and captured on video which will be viewable on the Willowbrook YouTube channel.

For more information about The Year of Willowbrook visit their Website.

In addition to Willowbrook: The Last Great Disgrace event in February, several events will address the evolution of the Willowbrook State School from model institution to disgrace, the advocacy that led to its closure, the extraordinary advancements made in ensuring the rights of persons with intellectual and developmental disabilities, and the ongoing crusade for education and memorialization surrounding those affected by Willowbrook and by other institutions like it.  Some highlights of The Year of Willowbrook will include:

Blackstone LaunchPad to Expand to CSI