It Began In A Time of Enlightenment

The late 1920’s and early 1930’s were an important time for Staten Island. Having just become readily accessible via the

Outerbridge Crossing and Goethals Bridge in 1928, and the Bayonne Bridge in 1931, the newly opened island sought other forms of connection to the outside world as well, in the form of higher public education. The first organized movement to establish a public college on Staten Island began in 1932. Petitions were circulated, signed and presented to the Board of Higher Education, but the Depression interceded and dashed hopes for a public college on Staten Island for the time being. In 1937 the campaign for a city college on Staten Island reasserted itself. 2,700 Staten Island residents petitioned the Board of Higher Education to bring a public institution of higher learning to the island; before the campaign’s end, 45,000 islanders had signed. A committee was formed to establish the need for public higher education on Staten Island, and then to prepare a budget for operation of a four-year college. While the Board of Higher Education agreed with the findings and the budget, the City Board of Estimate did not, as New York City slipped into dire financial straits.

A Fitting Memorial To Veterans After World War II, with the country back on its feet economically, Mark Dobbyn, Sr. wrote a letter to the Staten Island Advance, urging the establishment of a free college as the most fitting memorial to the veterans of Staten Island. State Assembly hopeful Edward V. Curry took up the cause and in the fall of 1948, made the establishment of a free college for Staten Island his first objective if elected. Curry won the race. This, and a change in legislation that allowed for State and local support of community colleges in deserving areas, paved the way for public higher education on Staten Island. By the spring of 1949, Associate State Commissioner of Education Lawrence L. Jarvie visited the island to inspect possible sites for a community college. With the Board of Higher Education and State University support, solid plans for a liberal arts community college were set in motion. But democracy being a slow-moving creature, it took until the spring of 1955 for the Board of Estimate of the City of New York to approve a community college for the borough. 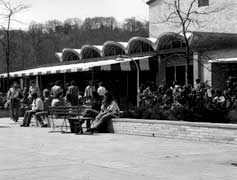 Staten Island Community College (SICC) held its first class on September 24, 1956. The original 14-member faculty taught the freshman Class of ’58 – totaling 113 students – in the curricula of Liberal Arts, Electrical Technology, Mechanical Technology and Pre-Engineering. The college’s first commencement exercises took place on the grounds of Sailors’ Snug Harbor on June 9, 1958. By the third year of the Community College, enrollment continued to increase and New York City took its first steps toward securing and building what would become the college’s Sunnyside campus on Todt Hill. By the mid-sixties, SICC – as well as many other of CUNY’s community colleges – had tens of thousands of students enrolled in their 2-year degree programs. But what of those students who wanted to continue their education upon graduation? Most four-year colleges already had their junior and senior slots filled by their own up-and-coming students. This led to a new concept in higher education, the “upper divisional” or senior college. And so Richmond College was founded in 1965.

The 60’s: A Time of Educational Experimentation 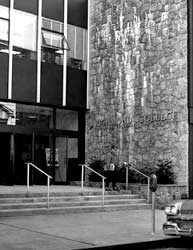 A senior college, Richmond College was the third college of its type in the country and the first in an urban area. Located in St. George, this CUNY upper divisional college had no freshman or sophomore classes, offering courses only for juniors and seniors.

In addition, Richmond College stressed interdisciplinary work, relating to several fields of study. The first president of Richmond College, Dr. Herbert Schueler, had described this aspect of the school in its first year: “…we have one course called ‘The Renaissance’ taught by three professors [from the music, history and comparative literature departments] and each teaches a different aspect of this one subject.”

Another radical feature of the school at the time was its Pass-Fail grading system, which was all about learning for learning’s sake rather than being pressured to make the grade. Schueler said at the time, “Yale copied our system. It’s the trend in colleges and it’s a good thing.” “Students hated it!” countered Dr. Edmond Volpe, who assumed the presidency of Richmond College in 1974. “Students wanted grades. If they were planning to go to graduate school, or to law school, they needed grades. It didn’t work.” But at least Richmond gave Pass-Fail the old college try.

Another aspect of Richmond College was the school’s willingness to explore radical programs of study like – get ready! – computer sciences and urban studies. As Schueler said in a 1965 interview, “Some day we’ll be able to transfer information within seconds between colleges by using TV or transmitting facsimiles… they call it ‘information retrieval’.” Richmond College was ahead of its time, if a bit of a victim to radical educational trends. But it was an experimental school… and it was the 60’s!

Both Staten Island Community College and Richmond College were part of the CUNY system. However, in terms of funding, the two colleges were very different. This is because SICC, as a community college, also received New York State support. Consequently, when the City verged on bankruptcy during its fiscal crisis of 1975, the Community College remained financially strong while Richmond College faced severe cutbacks, even possible extinction. It was suggested that by forming a federation where the two schools would merge but retain their separate missions, both would survive. But the federation didn’t last.

In 1976, twenty years after the founding of the first public college in the borough, theCollege of Staten Island (CSI) was born. It was a senior college – that is, a four-year school – which also offered a handful of graduate degrees. Dr. Edmond Volpe was made president of the newly created institution, but as with many mergers, there were growing pains: two venues, excess personnel, divergent curricula, duplicate departments, conflicted missions and more. There was also the continuing financial crisis in New York City. In a recent interview Dr. Volpe said, “We didn’t have a catalog for the first two years because there was no City money to print one and no curriculum agreement. We lost thousands of students during the merger, going from 14,000 students between the two colleges to 9,500 by the second year.” 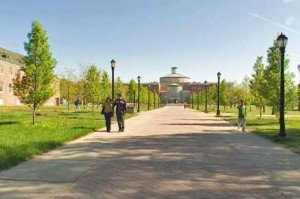 Yet the new college forged ahead. “I told the faculty that we had to build our own traditions,” said Dr. Volpe, “and we started the Alumni Association from scratch in 1977.” The young college progressed, ever-hopeful that one day, the merger would be complete, including a unified campus. That day did come. Through the generous assistance of State Senator John Marchi, then head of the Senate Finance Committee in Albany, the unified CSI campus we know today could be realized.

Completed in 1994, the 204-acre CSI campus is the largest site for a college in New York City. Set in a park-like landscape, the campus is centrally located on the Island. Mature trees and woodlands, flowering trees and ornamental plantings, fields and outdoor athletic facilities, the great lawn, sculpture, and seating areas create a rural oasis in an urban setting. Fourteen renovated neo-Georgian buildings serve as classrooms, laboratories, and offices. The academic buildings house approximately 200 modern laboratories. Each also contains a study lounge for students, department and program offices, and faculty offices. In addition to the renovation of existing buildings, new ones were constructed as well, including the: