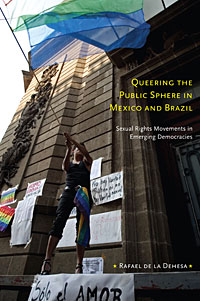 Queering the Public Sphere in Mexico and Brazil is a groundbreaking comparative analysis of the historical development and contemporary dynamics of LGBT activism in Latin America’s two largest democracies. Rafael de la Dehesa focuses on the ways that LGBT activists have engaged with the state, particularly in alliance with political parties and through government health agencies in the wake of the AIDS crisis. He examines this engagement against the backdrop of the broader political transitions to democracy, the neoliberal transformation of state–civil society relations, and the gradual consolidation of sexual rights at the international level. His comparison highlights similarities between sexual rights movements in Mexico and Brazil, including a convergence on legislative priorities such as antidiscrimination laws and the legal recognition of same-sex couples. At the same time, de la Dehesa points to notable differences in the tactics deployed by activists and the coalitions brought to bear on the state.