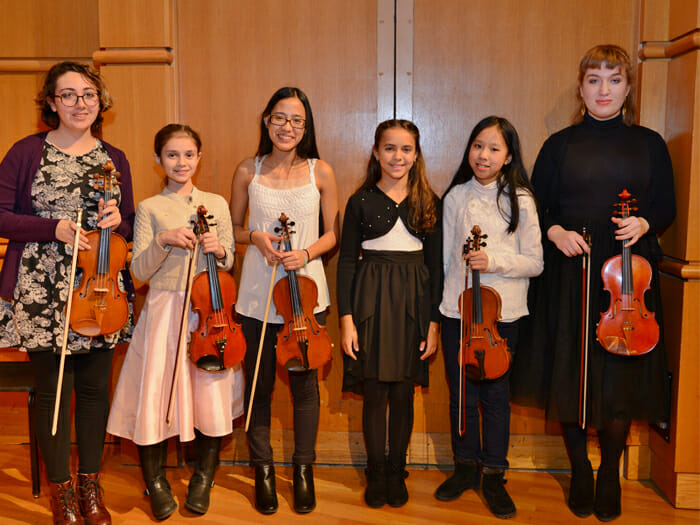 Young orchestra musicians from around Staten Island traveled to the College of Staten Island (CSI) for the first annual CSI Performance Competition for Strings. The only one of its kind on the Island, the event drew six high and four middle school students. Parents, students, and teachers experienced the sounds of strings at the winner’s recital, and organizer Dan Auerbach looks forward to continuing the tradition next year.

“These young people in the CSI competition show just what can happen if we can keep a young person’s dream alive,” commented Professor Auerbach, who ran a similar event in Georgia for many years. “I wanted to focus much-deserved attention on the wonderful musical talent in Staten Island and also on the hard work of area music teachers,” he noted.

The adjudicators for this year’s competition were Professors Auerbach and Edward Brown, both of the CSI Music Program of the Department of Performing and Creative Arts, and Maestro Alex Guzman of the Staten Island Philharmonic.

Also in attendance were Tyler Almquist on classical guitar, a student of CSI’s own Enrico Arcaro; Liam Gates on violin, a student of Deanna Eliot; Teresa Lynch from The Mighty String Demons, a student of Sanchie Bobrow; and Ganling Chu Braganti, a student of Anthony Harper.

Winners in the high school division from Staten Island schools are as follows:

Winners in the middle school division from Staten Island schools are as follows:

This year’s competition sponsors were Nan Sussman, PhD, Dean of Humanities and Social Sciences; the CSI Administration; the Performing and Creative Arts Department at CSI; Valpak of Staten Island/Greater Brooklyn; and Strings & Other Things.

While organizers work to secure funding for next year’s event, Professor Auerbach plans to open the competition up to all Staten Island residents, who may or may not attend an Island school. 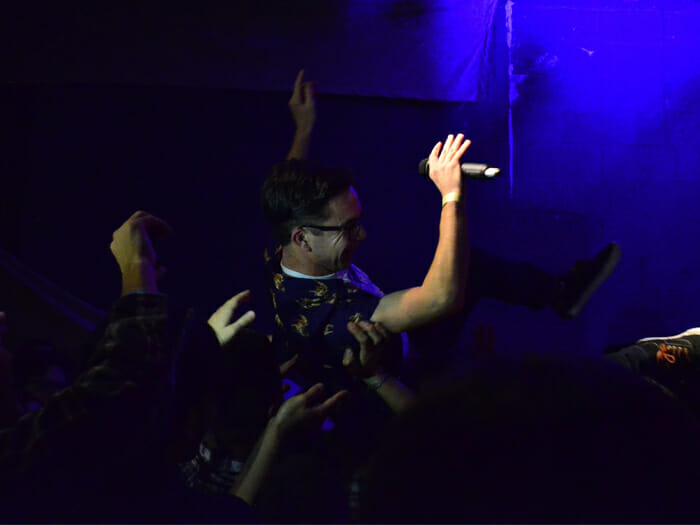 It has been well established among researchers that music can have a relaxing effect on people. Perhaps, no one knows that better than College of Staten Island (CSI) student Brian Raleigh ’18. The Verrazano School student has been a musician since age five, and now, as a successful college student in a popular band, Raleigh finds that his calm demeanor is his key to stress-less success.

“I feel like many college students get into the ‘end of the world’ mentality a lot of the time and it only makes them more stressed, which is not the goal of college. College is supposed to be a place that is challenging. However, the challenge does not lie with the actual work professors give. It lies with one’s response to it,” declares Raleigh, a Business Management major, minoring in Music.

While playing keyboard in his band, Wayward Strangers, at such popular venues as The Bitter End and Webster Hall, Raleigh still manages to work as a peer coach in the Office of Academic Support at CSI and at his family-owned shop, Eggers Ice Cream Parlor, while maintaining a 3.5 GPA.

Being a part of the CSI community is important to Raleigh, and he urges all CSI students to “make CSI your own! Don’t be afraid to stay on campus and make friends. CSI is a great school for the price we pay, and one should feel proud to go here. Get involved and enjoy college!”

The 20-year-old Petrides High School graduate is also a member of the CSI Music Club. His goal is to pursue music professionally, be it with his own band or as an associate in the industry, possibly opening a record label or talent management firm.

“I would like to shape this next generation of music as well as give back to a community that has given people behind them the chance to listen to amazing music,” Raleigh commented.

“The band is my passion but so is music in general. I think anyone’s dream career would be to travel the world with some of their best friends and make music. I think that with Wayward Strangers it’s a real possibility,” said Raleigh, a West Brighton resident.

The student credits Charles Liu, PhD, Director of the Macaulay and Verrazano School programs, because he, “really got me to think about life and the reality of the world outside of college. He is very inspiring and is always filled with surprises.”

Dr. Liu, also an astrophysics professor at the College, says Raleigh inspires him right back.  “Brian was a pleasure to have in my class – what an engaged, active learner he is!  He’s great to have around outside of class too – as a student, a musician, and much more.  He is a highly valued and greatly appreciated member of the Verrazano Community.”

The model student advises his fellow peers to keep up with their priorities and not to let too much responsibility weigh them down.

Raleigh insists, “Do not get caught up in the amount of work you have. Always do your work but always realize that every situation, good or bad, is temporary. Thus when life and school are good, push harder because at some point that good situation will start to change, so be prepared. On the other hand, I find myself buried in work all the time, but whether its school or work, when things get hard, I accept the challenge. I will get through it, good or bad, pass or fail, the stress will end.” 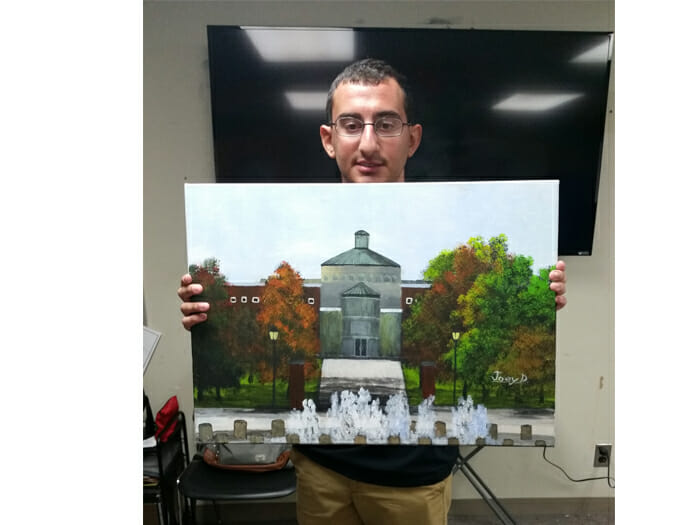 A simple stone path cuts through a lush garden of deep green shrubbery, warm red and orange flowers, and sprinkles of pink, white, and purple blooms. College of Staten Island (CSI) student Joseph DeCandido’s “My Eden Garden” gently catches the eye from its new home in the lobby of the U.S. District Court House in Downtown Brooklyn. The painting is one of DeCandido’s 15 original works in the show entitled See My Voice.

DeCandido is a student with autism who attends The Melissa Riggio Higher Education Program at CSI. An opening reception in July celebrating the exhibit drew more than 100 judges, court employees, friends, and family members.

The 22-year-old artist and Michael J. Petrides High School graduate hopes to be a famous artist one day. He is grateful to his mentors from the Melissa Riggio Program, as well as professors Tracy Jones and Pamela Brown “for believing in my talent and recommending me for the CSI Art Gallery.”

The Melissa Riggio Program is a part of the portfolio of Continuing Education and Professional Development. Executive Director Chris Cruz Cullari is proud of the young artist as well as the Program and its dedicated staff.

“This Program continues to be successful, and this success can be seen in the tremendous work of its students. Joseph is to be commended for his hard work, and the Program staff members are to be commended for their dedication to students,” lauded Cruz Cullari.

A Prince’s Bay resident and native Staten Islander, DeCandido was diagnosed with autism at the age of three and has used his artwork as a communication outlet since he was young. He learned to hone his craft by watching the late Bob Ross on television.

In kindergarten, DeCandido won an honorable mention in the Colgate Bright Smiles, Bright Futures contest, and his work was displayed at the Staten Island Children’s Museum during its annual art show from 2012 to 2015. In 2013 and 2014, he hosted his first two solo shows, New York City Sights and Neighborhoods and Lighthouse Mania, at the Pepperjack Grill restaurant in Castleton Corners.

See My Voice runs through October 7 in the Charles P. Sifton Gallery space in the Court House, 225 Cadman Plaza East on the first floor. It is open to the public on weekdays from 8:30am to 5:00pm.