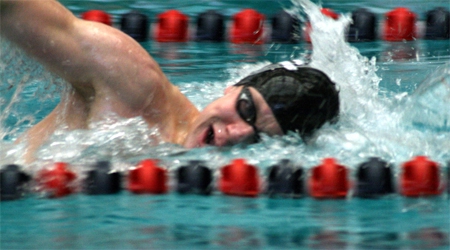 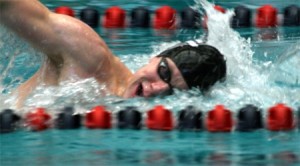 In a story that started way back in late September, one of freshman Danila Novikov’s dreams has been fulfilled, as the Russian-born native became only the second College of Staten Island men’s swimmer to medal at the NCAA Division III National Championship, taking home the bronze in the 200-yard Individual Medley event this evening at the Allan Jones Aquatic Center in Knoxville, Tennessee.  Novikov used a sensational back-end to nearly make a run at first place, posting a time of 1:49.99, a personal-best, and CSI and CUNYAC record.  Novikov was less than a second behind gold medalist Paul Dyrkacz of Williams College, who topped the field with a time of 1:49.10.

Novikov’s run at a medal began this morning, during the preliminary heats, when 51 swimmers were vying for a chance to end up in the final heat, among them teammates Andrey Tarasov and Vladislav Romanov.  Finishing in the top sixteen guarantees a point-scoring position in the evening heat, but a top-eight finish means a chance at a national championship.

Seeded second with a qualifying time of 1:50.54, Novikov came in a little off of his mark during preliminaries, coming in with a time of 1:50.83.  Despite the impressive showing, it cost him on the leaderboard, as Novikov slipped five spots, finishing 7th overall.  Still the freshman was going to return in the evening with a chance to medal.

“I didn’t show all that I could in the preliminary heat and that was my fault,” said Novikov, who said the preliminary heat cost him a bit because he had to swim in the eighth lane in the evening, which is usually a disadvantage, because you don’t have two swimmers alongside to pace against.  “I knew I would swim better in the evening, despite the problem of being in the eighth lane.”

In the evening heat, all eyes were on the top eight competitors, who were all within a half of one second within each of the other times, making the final wide-open for the taking.  It took two turns, but the frosh turned it up in the final, making for an unbelievable finish.

In the four legs of the event, Novikov started dead-last after the first turn at 24:58, as Spencer Fronk of Denison College led the way at 23.59.  After turn two, Novikov was still 8th in the field of eight, at 52.95.  In the third stage, Novikov turned it up a gear, putting in a time of 31.08 in the breaststroke, the best in the field, to propel up to third place.  The time on turn three was even better that Dyrkacz’s, whose signature event is also the breaststroke.  In the fourth leg, the freestyle, Novikov again was aces, where his time of 25.95 was third best, helping him to a third place finish overall, a mark he is very proud of.

“I feel very good about the performance,” he said.  “I did the best I could and I am fine with the result because I really swam well.  Maybe I could have done better if I was in one of the other lanes, but overall I am very happy.”

The strong back end of his race was something Head Coach Oleg Soloviev is used to seeing, since Novikov’s signature stroke is also the breaststroke.  Still, the coach was awed by the performance.

“For a freshman, competing in his first-ever national championship, on the first day of competition, it was absolutely outstanding,” Soloviev said.  “He had the fastest split in the breaststroke turn which was very impressive.”

Coming in second place in the event was Redlands College’s Christopher Depew, who clocked in at 1:49.57.  Novikov did however post the top freshman time in the field.

For Novikov, at the very least, the quality turn in the 200 IM will give him more confidence tomorrow, when the freshman braces for the 400-yard event in the same category.

“I feel a lot more confident,” he said.  “The competition is excellent and all I can do is my best, but when you have the other swimmers pushing you it makes you better.”

Tarasov’s mark of 1:53.10 in the same event was a personal best for the fellow freshman and good for 24th place, while Romanov placed 32nd overall with a time of 1:54.31, a full second ahead of his qualifying time.

The Dolphins also competed in the 200-yard Medley Relay, and put up a time of 1:33.09, which was good for 17th overall.
Competition extends tomorrow and through Saturday.  CSI has a total of 10 events in which they are competing. 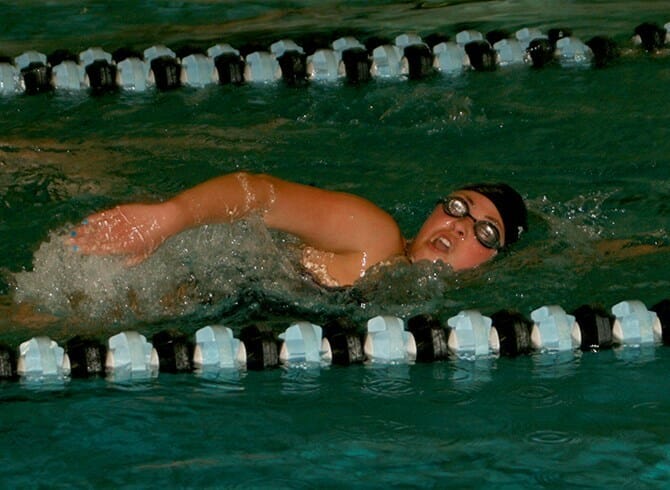