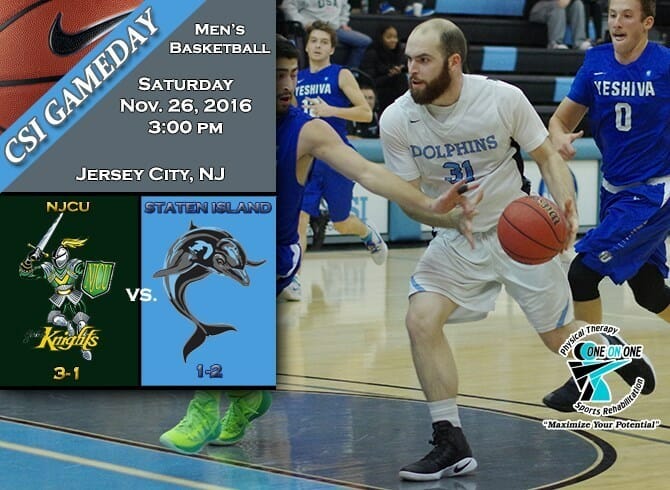 Coming off of their first win of the young season, the College of Staten Island men’s basketball is back in action today, taking to the road to face New Jersey City University at 3pm in Jersey City.  The Dolphins are 1-2 this season, scoring an 87-61 win over Yeshiva University, while the Gothic Knights come in at 3-1 overall.

CSI vs. NEW JERSEY CITY UNIVERSITY AT-A-GLANCE
Matchup: CSI (1-2 overall, 0-0 CUNYAC) vs. New Jersey City University (3-1 Overall, 1-0 NJAC)
Where: Moore Center – 2039 John F. Kennedy Blvd., Jersey City, NJ
Tip-Off:  3:00 pm
Ticket Info:  $5 General Admission / $3 Students with ID
Live Stats: http://sidearmstats.com/njcu/mbball/
Live Video: https://www.youtube.com/user/NJCUGothicKnights/Live
All-Time Series: NJCU leads 13-6
Last Meeting: March 5, 2014 – CSI won 79-74
Players To Watch (CSI):  Frank Schettino made history on Tuesday, becoming the school’s all-time career assists leader.  He currently leads the team with 21 helpers to go with a team-best 23 points per game average on 48% shooting.  Three-point threat Edin Bracic is second on the squad with 13 points per contest and is shooting 47% from downtown.  Interior threat Khaleeq Baum is posting 11.7 points per game and a team-best 6.7 rebounds per game.  Sophomore transfer Robert Rossiter is earning valuable minutes and is posting eight points per game and is second on the squad in blocked shots.
Players To Watch (NJCU):  Look no further than Jalen Harris for the Knights as he is posting 19.3 points per game and is a constant threat sporting a 54% clip from the field.  Kevin Brown, Sam Toney, and Chinwe Wosu are all averaging over seven points per game, with Toney leading the way with 7.3 rebounds per game and 6 total blocks as well.  Ata Robinson is leading the team in the back court with 11 assists.
News & Notes: CSI’s rivalry with NJCU dates back to 1979, and the Knights hold a 13-6 overall advantage, a mark that includes a perfect 7-0 record against CSI on their home floor.  The teams have only met three times since 2009 with CSi taking two of the three, both on their home floor.  All three meetings were decided by less than 10 points.  Dating back to last year, NJCU is 12-2 on their home floor and the Dolphins are 9-7 on opposing turf during that same span.  The series has been a good one, however, with the teams having split the last eight meetings dating back to the 1995 season.  CSI shot a blistering 56% from the floor in their win over Yeshiva, and as their shooting goes, so do the Dolphins.  CSI is now 18-3 (.857) dating back to last year when shooting better than 45% from the field, but are just 1-6 (.142) in that same time when they fall under.  That plays into NJCU’s strength, as they are holding opponents to just 34.2% shooting this season and a paltry 55.5 points per contest.  Turnovers appear to be the key for the Gothic Knights.  The team is a sensational 16-1 (.941) when committing 15 or less turnovers in a game dating back to a season ago, but are a rather pedestrian 8-8 (.500) when they’ve committed more than 15 in a single game.  The Dolphins have won eight of their last 10 games when forcing over 15 turnovers in a contest, including their win on Tuesday.  Now that senior Frank Schettino got the all-time assists record out of the way, he will climb the scoring ladder as well.  Schettino sits 24th all-time in that category, needing 52 to surpass former Dolphin Michael Nebavlakis for 23rd all-time.  He also needs three more steals to sit in a tie for 8th all-time in that category.