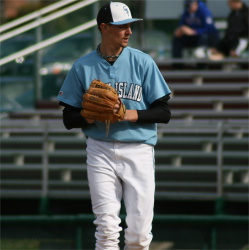 College of Staten Island baseball hurler Richard Anderson represented the Dolphins on the weekly CUNYAC honors list, being named the conference’s Pitcher of the Week.  CSI sported a 2-0 record last week to up their overall mark to 11-10 and boost their win streak up to five games.  Anderson was the shining star of the team’s first win of the week, a 4-0 triumph over visiting Purchase State.

Anderson, the winning pitcher in last year’s CUNYAC Championship Game via a 10-inning, 1-0, win, started the season with a nine inning shutout against Ferrum College.  The junior, however, dropped his last two decisions before his sterling effort last Tuesday.  Anderson tossed seven of the nine innings played, fanning five batters without registering a walk, allowing a single hit, while the Dolphins added a single run in the fourth and three more in the sixth to grab the 4-0 win.

For the season Anderson sports a 3-2 record with a 3.38 ERA, registering 31 strikeouts through an even 40 innings of work, allowing only a pair of walks.

CSI is back in action today, hosting Kean University at the CSI Baseball Complex for a single non-conference game at 4pm.