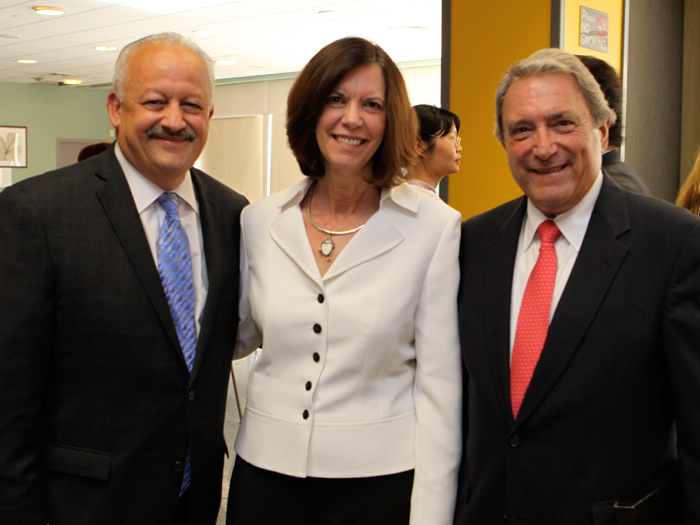 College of Staten Island President Dr. Tomás D. Morales, who will soon be heading to California State University, San Bernadino as the new President, was honored last week at a gathering in the Campus Center.

After remarking on Dr. Morales’s vast contributions to the College over his nearly five-year tenure as President to the large crowd of supporters who were on hand for the event, incoming Interim President Dr. William Fritz announced that the CUNY Board of Trustees approved a resolution to name the CSI Baseball Complex the President Tomás D. Morales, PhD Baseball Complex. Throughout his time at CSI, Dr. Morales has been a staunch supporter of athletics at the College, and student-athletes in particular. In addition, Dr. Fritz, also unveiled a rendering of an engraved bench in the President’s honor that will be placed on Alumni Walk.

Ronald J. Mazzucco, Chairman of the Executive Committee of the Board of Trustees of Staten Island University Hospital  (SIUH) and other Hospital representatives also presented a plaque to Dr. Morales, in recognition of his service on the Hospital’s Board of Trustees.

Dr. Morales closed the event with words of gratitude for the College and Staten Island communities. Reiterating one of his key strategies as President, “It’s all about the students,” he said that he could not have succeeded in moving the College ahead if it were not for the support of the College’s faculty and staff, as well as his wife Evy, who was also in attendance.