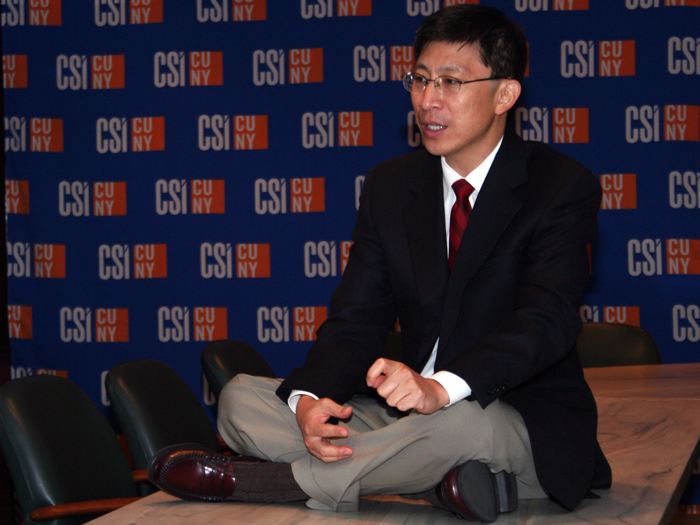 During a recent photo shoot for CSI Today, Professor Charles Liu was having a hard time standing still. With each click of the camera’s shutter, Prof. Liu grew more animated, first shifting in his chair, then rising altogether.  His polite smile evolved into a broad grin as he tossed his blazer over his shoulder and began offering his own direction. “What if I lean on something?” he asked. “Try some action shots,” he said before jumping into the air, his arms and legs splayed forming a lithe “X” with his entire body.

The renowned astrophysicist who has spent much of his career studying galaxy evolution as an Astrophysics Professor at CSI, as well as an Associate of the Hayden Planetarium and Department of Astrophysics with the American Museum of Natural History—is going to need all of that energy after being appointed, as of this past July, as Director of The Macaulay Honors College at CSI. This appointment is in addition to his continued service as the Director of The Verrazano School.

Prof. Liu does not seem to mind being one of the busiest people on campus as his faith in the faculty and staff working with each honors programs is steadfast. “The staff is terrific,” he beamed, during a break between shots. “The people I work with—from Katie Geschwendt and Cynthia Palumbo at The Verrazano School to Lisa French, Anita Romano, Barbara Uszacki, and Kim DeMarzio at the Macaulay Honors College—are so dedicated to doing what is best for the students that they make it possible for me to do my best too.”

Already a campus favorite due to his high energy and sense of humor, Prof. Liu is continuously evolving his technique with the ultimate goal of making college a place students want to attend, instead of a place they have to.  As an example, he likened studying to shooting a basketball. While students who play basketball seem to have no issue with practicing their jump shots all day, those same students may not be as dedicated to studying and attending classes. “Our job is to make the classroom as meaningful and enjoyable as the basketball court,” said Prof. Liu, completing the analogy.

When asked how he planned to help convince students to want to be more dedicated to their studies, he answered that, while there is “no magic formula,” the unique nature of each honors program does make it possible. Both are relatively small, allowing the faculty and staff to address individual students’ needs first and foremost. He is also a fan of students studying abroad and performing practical applications of the work they study in class through service learning, internships, and research. “We serve each student with a separate solution, not with a cookie cutter,” he said. “What really helps is the willingness of each program’s bureaucracy to be flexible and student-centered.”

When asked how he feels about now being a part of that bureaucracy he answered, with a large grin, of course, “I try to say “no” to every administrative job offered to me—twice.”

It is that practically allergic reaction to wielding authority that helps Prof. Liu connect with his students. According to him, Prof. Liu grew up devoting time to a wide range of subjects in addition to science, especially his love of music. To the chagrin of his parents, he spent hours each day “in my room composing and arranging musical scores.” He realized at a young age that as long as he was able to take care of and manage what was expected of him, “I was allowed to be unusual, to be myself—and that made me who I am.”  He now extends that line of thought as a professor and administrator. “The core expectations of a professor are to do great scholarship and always be enthusiastic about transferring that information to your students,” he said.

Before agreeing to add the directorship of the Macaulay Honors College at CSI to his role as head of  The Verrazano School, Prof. Liu had some long conversations with his wife Amy (herself a former college professor) and their children Hannah, Allen, and Isaac. “Their support—their belief in me that, by taking this dual directorship position, I could do a lot of good for the College and its students—made all the difference in my decision.” As Director, he is not interested in personal legacy but rather in making sure “the great things that the honors programs do remain great and are fully supported.”  He was also clear to state that he wants to grow the programs not so much in terms of size, but rather “in the quality of results.”

That was finally what led him to accept the two positions—“a focus on results.” Prof. Liu likes the fact that each honors program has its own identity and strengths; in their admissions policies, for example, Macaulay only accepts incoming freshmen, while The Verrazano School accepts transfer students along with freshmen. Yet, both programs have produced similarly impressive and successful graduates; the last two CSI valedictorians have been Verrazano students, and the last two CSI salutatorians have been Macaulay students. Prof. Liu believes that his job is to help students “feel proud that they can change the world but also be humble.” His goal is to foster a community of students who want to seek knowledge and serve their communities. “The point of college, beyond graduating with a degree in hand, is to grow as a human being so you can be and achieve whatever you want,” he said, returning to posing for the camera.

He seemed more settled as the photo session wound down—perhaps sensing that the afternoon was growing late or realizing that there were enough shots taken for the Website.  More likely, though, he was saving his energy for the work ahead.