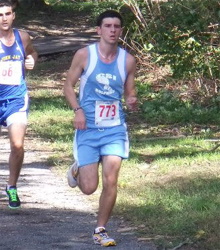 The College of Staten Island men’s and women’s cross-country programs officially got underway this weekend, participating in the Baruch College Invitational yesterday at Van Cortlandt Park in the Bronx, New York.  The CSI men finished 9th overall in the field, which included a pair of Top 10 finishers.  The CSI women did not place in the event, but saw two runners make their CSI debuts.

The CSI men made quite a mark in their first foray of the season.  Tradition has shown that the team improves their times with every meet, and that said; CSI stands to be a formidable team come late October when competing for a championship.  Sophomore Andrew Pate was a catalyst, coming in fourth place overall with an 8K race time of 29:52, which was also good for second among CUNYAC runners to Hunter’s Justin Lee (29:36).  Goldey-Beacom College’s Stewart Reich won the event overall with a race time of 28:32.  Not to be outdone, CSI newcomer Samuel Obisanya turned in a very impressive debut of 31:52, rounding out the field’s Top 10, and was the 6th overall among conference runners.

Michael Wallace was the leader of the remaining four runners to cross for CSI, topping in at 35:31, good for 46th overall.  At the 40-minute mark, Shawn Cybulska came in at 40:08, followed shortly after by both Michael Allamby (42:23) and Michael Gratkowski (42:42).

On the women’s side, CSI did not place as a team, but used the race as a vehicle to introduce two freshman runners in the 6K event.  Victoria Barry certainly impressed, posting a 31:48 mark, which was good for 22nd overall and 15th among CUNYAC runners, followed by Ayat Odeh’s debut of 41:09.

Baruch College was the winner of their own meet, scoring 28 points and beating second-place Yeshiva University by a hefty 49 points.  Brooklyn College came in third place.

Up next for CSI will be the Queensborough Community College Invitational next Sunday, September 16, beginning at 9am.