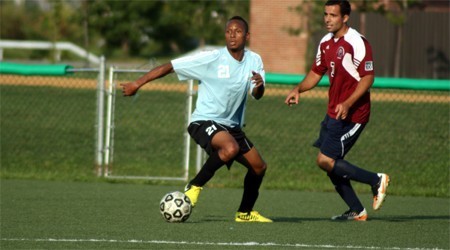 The College of Staten Island men’s soccer team dropped their non-conference test to visiting FDU-Florham today, 4-1, in a match played this afternoon at the CSI Soccer Complex.  CSI saw their modest two-game win streak snapped and fell to 4-4 overall, while the Devils, winners of two straight, improved to 4-4 as well.

Despite an evenly-matched first half, one that saw CSI hold an edge in overall shots, 8-6, it was the opportunistic Devils that landed themselves a 2-0 lead.  At the 26:33 mark, Emin Matezic capitalized on a loose ball to drive home a goal from CSI keeper Ahmed El-Ghareib’s left, to make it a 1-0 game.  The score looked like it would hold up until halftime, but another CSI turnover led to another FDU goal, this time with just 46 seconds left in the stanza.  Michael Vinci did the honors this time, converging on a loose ball in the box to put the visitors in control.

In the second half, both teams had an equal amount of time in the other’s zone.  CSI amped up the offensive pressure, while the Devils looked to capitalize on long counter-attacking runs up the pitch.  Both teams had their chances, but the play of El-Ghareib and FDU keeper Andrew D’Angelo kept the second half sheet clean until there was a little over 22 minutes to play.

CSI struck first, when a strike by Alfonso Castaneda was bounced of D’Angelo and on to the waiting foot of Horatio Reid, who blasted in his first career goal from short range to make it a one-goal game, 2-1.  CSI continued to press, but it cost the Dolphins, as FDU was able to counter for a pair of goals with inside of eight minutes to play.  First, Emin Matesic was able to play a ball off of a rebound into the cage with 7:40 to go, while Ryan Hurdes made a great, unassisted, solo run down the right side then took a pair of shots on El-Ghareib, the latter into the net to give FDU a 4-1 edge with just 1:50 to go.

FDU led the final shot count, 23-17 (11-7 on goal), and earned a 3-2 edge in corner kicks.  El-Ghareib made seven saves in defeat while D’Angelo posted six saves in net for FDU.  CSI’s Castaneda was shown the only game’s caution card in the 84th minute.

CSI will be back in action on Wednesday afternoon at 4pm, when they open up conference play with a game against York College at the CSI Soccer Complex.