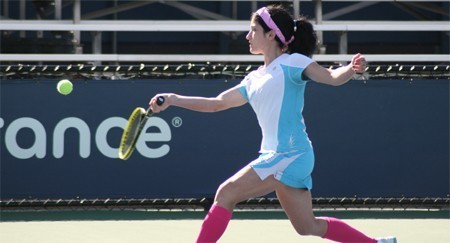 The College of Staten Island women’s tennis squad, idle for the past two weeks due to the rainy weather, scored an impressive, 6-3, winner over Brooklyn College this afternoon as part of CUNYAC action, their fourth straight win.  CSI improved to 6-4 overall and 4-1 in the conference, while previously unbeaten Brooklyn fell to 7-3, 5-1, respectively.

The Bulldogs were the team that was seemingly in the driver’s seat after doubles, scoring two wins to take a 2-1 lead.  Yuliya Orkis and Liana Rivkin powered over CSI’s Sabrina Bragerton-Nasert and Ilona Stoyko, 8-1, and after Maria Sanz and Gianna Gelosi at No. 2, squeaked by the CSI tandem of Jean Baak and Madiha Mulla, 9-7.  Needing to get on the board, CSI found solace at the No. 3 position, where newcomer Jessica Barabatko teamed with Jacqueline Jamaleddine to score a narrow, 8-5, win over the BC team of Hadiya Cameron and Olayinka Sarayi.

When play switched to doubles, CSI needed to win four out of the six flights, normally a tall order.  That became even tougher when the Bulldogs’ Orkis scored a 6-0, 6-0, winner at the top spot, giving BC a 3-1 lead.  From there, however, CSI answered the call.  Jean Baak, at No. 3, and Mulla, at No. 5, were almost perfect, dropping only a single game each to score wins, knotting the match at 3-3.

CSI’s next match will be this coming Sunday against visiting Mount Saint Mary College at 1pm.