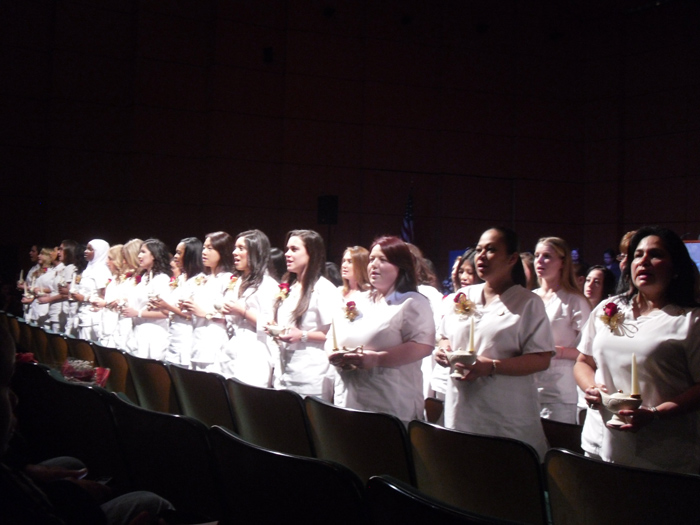 The CSI Department of Nursing held its Nursing Pinning Ceremony in the Center for the Arts recently to honor the 75 nursing students who have completed their professional education this semester.

More than half of the nursing students are non-traditional college students—many are mothers, one is a new grandfather. Several are second-career students from many different backgrounds. Some have previous college degrees; most work and go to school. This year was perhaps even more challenging as many of the students were victims of Hurricane Sandy—some lost homes, books, cars, computers—the list goes on. To their credit, these nursing students not only persevered but were proactive in overcoming the challenges that Sandy put in front of them. This cohort of nurses made a donation of approximately $1,000 to CSI for the Petrie Foundation for hurricane relief.

CSI Interim President Dr. William Fritz attended the ceremony and addressed the nursing graduates. His mother, an RN, was an honored guest.

In his remarks, Dr, Fritz emphasized the strengths of the CSI Nursing Department, noting that the “CSI Nursing faculty set high standards for pedagogy and scholarship and is recognized throughout the nursing profession as one of the best.  Year after year, [the Department] boasts one of the highest pass rates for the state-wide nursing certification exam. For over 25 years, CSI has trained and graduated more than 5,000 nurses, who have gone on to become the backbone of healthcare onStaten Island.”

Dr. Fritz added that “CSI’s continues to support for nursing and health science programs as evidenced by the new Simulation Lab for the Education of Nurses in the Care of Older Adults, and the development of a School of Health Sciences and Human Services….”

After Dr. Fritz’s comments, Dr. Susan Mee, an Assistant Professor from the Nursing Department, said, “It is a great privilege to work with our Nursing students to plan this special ceremony. I am always inspired by their dedication and humbled when I learn of the adversity that they have overcome to achieve their educational and professional goals. They have a lot of heart.”

She was also impressed by the way the students banded together during this trying semester. “This semester was particularly difficult for our students, many of whom were profoundly affected by Superstorm Sandy. Many lost their homes, their cars, their computers, and their books. Fellow students drove their classmates to class, raised money for the CSI fund, and worked as volunteers. It is to their great credit that they completed a rigorous academic program in the face of such devastation. We are so very proud of their great achievements and honored to have been a part of their nursing education.”

Larissa Smirnova, the student speaker for the event, echoed those thoughts when she addressed the audience saying, “There were many times when I thought I would not reach this finish line, but those struggles have only made this moment sweeter.”  She went on to say, “I believe that all of today’s graduates chose nursing as a career deliberately…we have faced our fears, overcome our disappointments and achieved this goal.”

Smirnova also took to chance to thank her husband and 12-year-old son for their patience and support, and ended her speech with what she believes is the most important aspect of the nursing profession, quoting Albert Einstein, “The important thing is not to stop questioning.”

Approximately 95 percent of this year’s cohort will re-matriculate into the CSI Bachelor’s degree program, allowing them to have even greater opportunities beyond college.

The pinning ceremony is a time-honored nursing school tradition. Often more personally meaningful than the graduation ceremony, it signifies their official initiation into the profession of nursing.  The modern ceremony dates back to the 1860s, when Florence Nightingale was awarded the Red Cross of St. George in recognition for her tireless service to the injured during the Crimean War. To share the honor, she, in turn, presented a medal of excellence to her brightest graduates.

Each school’s pin is unique and holds its own symbolic meaning. CSI’s nursing pin reads, “Scientia In Actione,” or “Knowledge in Action.”