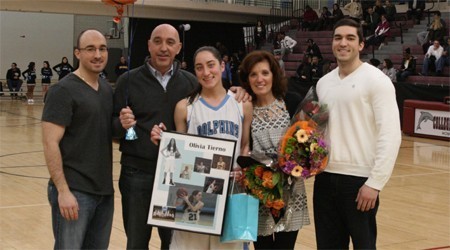 The College of Staten Island women’s basketball squad overcame a cold-shooting first half and a halftime deficit, scoring a 74-60 win over visiting John Jay College at part of CUNYAC play at the Sports & Recreation Center. CSI improved to 14-10 overall and 11-4 in the CUNYAC, while JJC fell to 13-12, 10-6, respectively. The win assured the Dolphins no less that third place in the final CUNYAC standings, thus insuring them a first-round home quarterfinal game next weekend.

Prior to tip-off, the Dolphins honored their lone senior, Olivia Tierno, but the rousing ceremony didn’t translate to CSI’s start of the game, as the team shot just 20.6% in the first half and struggled to find points. Still, the game bounced back and forth in the first 10+ minutes, with the team’s swapping leads on eleven occasions. A jumper by Lisa Galasso and a pair free-throws by Nikki Fabozzi gave CSI a modest, 20-18, lead with 6:43 to go, but from there, JJC closed the frame on a 12-5 run.

A lay-up by Tyana Hale got the Bloodhounds started, and after a CSI miss, Victoria Story hit two straight baskets, the first a three-pointer to give John Jay a 25-20 lead. After another pair of CSI misses and a turnover, JJC’s Danielle Eagan roped in another three-pointer and CSI had their biggest lead with 1:38 to go in the frame, 28-20 en route to the 30-25 advantage.

CSI needed an offensive lift in the second half, and after misfiring on their first attempt, the Dolphins started to find their rhythm. Baskets by Galasso and Fabozzi got CSI started and at 17:04, a Megan Myhre three-ball knotted the game at 34-34 and from there, the game was up for grabs. Myhre would end up tying the game again on the next possession before a Melanie Johnson free-throw, gave CSI the lead back at 37-36 with 14:57 to go, CSI’s first lead of the second frame.

Still, JJC refused to go quietly and the next seven minutes the team stayed neck-and -neck. The Dolphins never led by more than four points, and at 8:34, a Jamecia Forsythe jumper, after she connected on a pair of free-throws the possession before, knotted the game up at 50-50. On the next possession, Story again struck for the ‘Hounds, nailing a three to put her team up by three. CSI, however, came right back with a Galasso lay-up, and after Tierno forced a Forsythe turnover, Danielle Kartalis scored a lay-up of her own to put CSI up 54-53. After a JJC miss, the senior Tierno struck with a running baseline lay-up, and in the blink of an eye, CSI was back up 56-53.

Seeming to run out of steam, the Bloodhounds struggled in the waning moments, and CSI picked up the tempo defensively. what resulted was a 14-2 run over just four minutes, as Galasso scored a pair of lay-ups and Melanie Johnson notched another four free-throws, giving CSI a commanding 64-55 lead with 4:23 to go.

A Kaitlin Fitzgerald lay-up would ultimately cut CSI’s lead to six, 64-58, with 3:24 to go, but a Johnson three-pointer and then another three-point bomb by Victoria Gallinaro with the shot clock winding down bounced CSI back up by 72-60, and after another pair of long-range misses by JJC, CSI added a late basket to take their biggest lead at the end of the game.

After the dismal-shooting first stanza, CSI shot 53.6% in the second frame, outscoring JJC, 49-30, in the second half. JJC out-rebounded CSI, 47-42, but the Dolphins forced 23 JJC turnovers next to their 13. Leading the way for CSI was Galasso with 20 points, followed by Fabozzi’s 18 points and 11 rebounds in just 30 minutes. Tierno finished with 10 points and four rebounds. Forsythe put forth a monster effort for the Bloodhounds, scoring 17 points and a whopping 23 rebounds and four assists. Story added 16 points, with Tyana Hall pouring in 10 points.

With a CUNYAC mark of 11-4, CSI cannot finish any lower that third place in the standings. They still have one game left on their schedule, travelling to Hunter College on Tuesday at 5pm. That game will determine final positioning for both teams. No matter who CSI plays, the Dolphins will host their CUNYAC Quarterfinal Game on Saturday, February 16, at 3pm, at the Sports & Recreation Center.