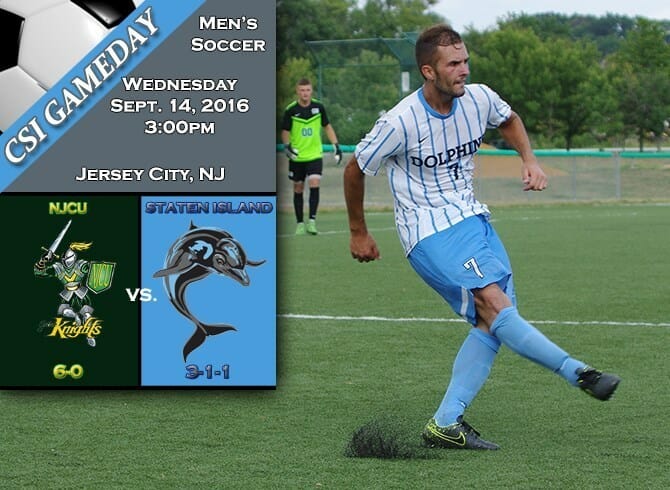 After a busy weekend set the Dolphins’ men’s soccer unit is back in action this afternoon, taking on undefeated New Jersey City University in Jersey City at 3:00pm.  The Dolphins enter a respectable 3-1-1 on the year, but haven’t posted a win in 9 days, having mustered only a 0-0 draw in action last week.

CSI vs. NEW JERSEY CITY UNIVERSITY AT-A-GLANCE
Matchup:  CSI (3-1-1 overall, 0-0 CUNYAC) vs. New Jersey City University (6-0 Overall, 0-0 NJAC)
Where: Robert L. McNulty Memorial Soccer Field – 2039 JFK Boulevard, Jersey City, NJ
Kick-Off: 3:00pm
Live Video:  http://www.youtube.com/user/NJCUGothicKnights/Live
Live Stats:  http://sidearmstats.com/njcu/msoc/
All-Time Series:  NJCU leads, 16-9-1
Last Year’s Result:  CSI won, 6-1
Players To Watch (CSI):  CUNYAC Defender of the Week Jake Foeldes will have many eyes on him, coming off of a career-high 10 saves in a scoreless tie against PSU-Behrend this weekend.  Offensively, Marcin Klim continues to pace the league and much of the nation in goals with seven of the Dolphins’ 10 markers this season.  Back line mates Ruben Diaz, Jacob Szumanski, and Ilir Papraniku, all seniors will be looked at as anchors for CSI, looking to stop the potent offense of the Gothic Knights.
Players To Watch (NJCU): Omar Ventura leads the Knights attack with seven markers, while Davauni Brown is right behid at six goals and a team-best four assists.  Six other goal scorers decorate the roster, proving that the Gothic Knights are a potent offensive side.  Adam Cassidy has anchored a tight back line between the pipes, making 20 saves on the season, yielding just five goals over the first six starts of the season.  He boasts an .800 save percentage.
News and Notes: These two sides have met every year since 2013, with CSI winning the last two meetings despits NJCU having a commanding edge in the overall series.  Prior to 2014, NJCU had taken five straight in the series by a combined 44-2 count.  The 6-1 win by the Dolphins over the Knights a year ago was the biggest CSI win in the series since a win by the identical score in 1980.  CSI is just 2-10-1 all-time on the road against NJCU.  The teams share two common opponents thus far in Purchase State and Yeshiva.  NJCU beat the Panthers, 3-0, as did CSI, and NJCU scored a 6-0 win over the Maccabees while CSI won their game against them, 5-0.  The Gothic Knights are already 2-0 against CUNYAC competition, having beaten Baruch College, 2-0, on opening day and Lehman College, 6-2, a week ago.