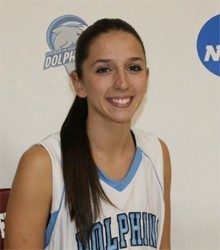 The College of Staten Island women’s basketball team won for the fourth straight time, helping them clinch the No. 3 seed in the upcoming CUNYAC Postseason Tournament, with a 69-51 win over Hunter College. The game, which was supposed to be played at Hunter in Manhattan, was moved to the Sports & Recreation Center due to a maintenance issue. As the road team on its home court, CSI lifted its overall mark to 15-10 and 11-4 in the CUNYAC, while the Hawks fell to 11-14, 9-7, respectively. The win also secured a CSI a date with No. 6 Lehman College in the tournament quarterfinals, which kick-off on Saturday.

It took the Dolphins a while to get going, as CSI only mustered up a 9-9 tie score through the game’s first five minutes, but the steady Dolphins stayed the course and pieced together a 21-3 run that would span the next seven minutes. The run started with back-to-back Victoria Gallinaro three-pointers, and she would add another before sophomore Nikki Fabozzi hit back-to-back treys as well. With 8:43 remaining in the stanza, CSI had a commanding 30-12 lead.

CSI held the Hawks at bay from there, using a mini 7-0 run to close the half and take their biggest lead into the locker room, 49-26. To that point, CSI was basking in taking advantage of the Hawks’ errors, as CSI had scored 28 of their 49 first-half points off of Hawks turnovers.

In the second frame, CSI led by as many as 26 points, before Hunter was able to eventually knock the lead down to 18 by the close of the game. The Dolphins, who had shot 7-11 from three-point range in the first half, were just 1-7 from downtown in the second, as the Hawks held the Dolphins to just 20 second half points.

Leading the way for CSI was Melanie Johnson with 14 points, followed by Gallinaro’s 13 and 10 each for Nikki Fabozzi and Olivia Tierno. Hunter saw 14 points and a game-high 13 rebounds from Ayanna Hudson, while Kristen Selis finished with 12 points. Hunter out-rebounded CSI, 41-37, but were plagued by 28 total turnovers.