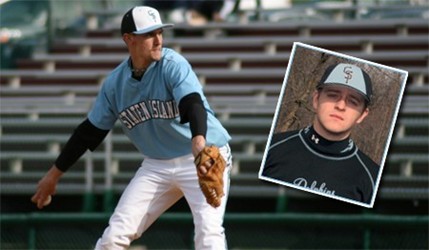 For the second week in a row the Dolphins boast a weekly award winner in baseball.  This week, two Dolphins were cited with excellence as junior Chris Ramanauskas earned CUNYAC Player of the Week honors while senior hurler Richard Anderson took home the conference’s Pitcher of the Week laurel.  The Dolphins went through a 3-1 week with a pair of weekend doubleheaders.

Ramanauskas, who joined the Dolphins as a junior transfer from NCAA Division II Queens College, has hit the ground running for the Dolphins, and has enjoyed a sensational start.  Over the weekend, Ramanauskas hit safely in all four contests, going 8-for-12 at the dish (.667) with a trio of RBI and a pair of runs scored.  He doubled in CSI’s 3-0 win over SUNY-Maritime on Saturday, and went a perfect 5-for-5 (with a walk) in the twinbill against Yeshiva University on Sunday.  Ramanauskas also added a pair of walks on the week, was hit by a pitch, and stole three bases.

For the season, the third baseman is currently among the top of the CSI annals in a host of categories.  He is batting a team-best .467 (14-30), leading the squad in hits (14), RBI (7), and walks (6).  His four hits in the opening game against Yeshiva on Sunday marked the 111th time a CSI player has garnered 4+ hits in a single contest.

On the hill, Anderson made the lone appearance, but it was a gem.  The senior, 1-1 in his previous two starts, was lights-out in the snow and rainy mix in Throggs Neck on Saturday.  The hard-throwing right-hander allowed just a lone hit to the SUNY-Maritime order, tossing his ninth career complete game, striking out 10 batters.  Anderson leads the CSI arms with two wins, 18.0 innings pitched and 18 strikeouts.  Opponents are hitting just .268 against him and through his last start he lowered his ERA from 4.19 to 3.00.

The Dolphins are back in action tomorrow evening, when they face off against the United States Merchant Marine Academy at the CSI Baseball Complex at 6:00pm.