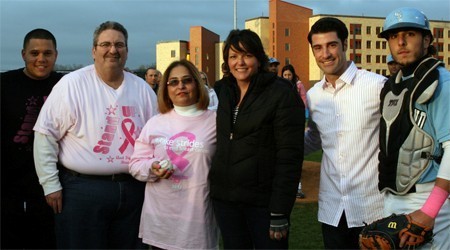 The College of Staten Island men’s baseball squad had their longest winning streak in 20 years halted at 12 games, falling to visiting Drew University tonight, 3-1, as part of the 10th Annual Grace Hillery Breast Cancer Awareness Night at the Tomas D. Morales Baseball Field in Willowbrook. More important than the game, however, was the tally in the donation category, as the Dolphins tallied up a total of over $4,500 in funds to support CSI’s own Staten Island Breast Cancer Research Initiative.

The evening kicked off with introductions of the night’s guest of honor, Anthony Hillery, CSI baseball alum who lost his mother, Grace Hillery, during the 2004 season. Hillery greeted CSI President Dr. William Fritz, CSI Assistant Athletic Director Katie Arcuri, CSI coaches Mike Mauro and Neil Barbella and members of the SIBCRI, led by Executive Director Donna Gerstle. That was followed by the kick-off donation, made by title sponsor One-on-One Rehabilitation Services in the amount of $1,000, presented by Joe Saraceno and Stephen Barth. Following the initiative, the game’s ceremonial first pitch was offered by both Mrs. Patricia Parisi and Mrs. Suzanne O’Donnell, breast cancer survivors.

On the field of play, the pitcher’s duel featured a stand-off between CSI’s John Baggs and Drew’s Bobby Miskura.  Drew tallied a run in the second off of a Dominic Reyes RBI-single, but CSI erased the run with one of their own in the third.  Dan Lynch drew a two-out walk and after advancing to second base on a wild pitch, was plated by a Bryan Moreno single.  The hurlers settled from there, allowing only a pair of base runners going into the eighth frame.  There, Drew plated two unearned runs.  A dropped ball in the outfield on a would be running-catch by DiFede allowed one runner to score, and a Mark Alessio Single plated another.

CSI threatened in both the eighth and ninth.  In the final frame, CSI loaded the bases, but Miskura was left in to pitch to CSI’s Ciprello, and the frosh popped out harmlessly to left field to seal the game.  Miskura tossed the complete-game nine innings, allowing the lone run on seven hits, fanning 11.  Baggs was the hard-luck loser, allowing three runs (one earned) on 9 hits through 7.2 innings, fanning three.

The loss and the unseasonably cold weather did not dampen the spirits of those in attendance, however.

“I want to thank both teams, because they make this event special every year, allowing us to come back and remembering my mother,” said Hillery, during his seventh inning address. “The best part about this event is the people who make this night the success it always is.”

CSI skipper Michael Mauro agreed.  “It was a great night for Anthony and his family and it’s great for us to be a part of it,” he said. “Nights like this make us look forward to doing it over and over again.  It was a great night no matter what the score.”

The over $4,500 in money raised in 2013 brings the overall tally to over $48,000 since the event was chartered ten years ago, and CSI intends to grow the game each year.  The amount raised included a $300 shot offered by Drew’s baseball squad, which turned over its meal money for the game to the effort, commemorated in a third-inning ceremony with Drew Athletic Director Jason Fein and Head Coach Brian Hirschberg.

For CSI, the loss was bittersweet, as it marked an end to their 12-game win skein, the second longest streak in program history, matching the same length of streak they had in 1993.  CSI won 20 straight in 1992, finishing 29-4.

CSI is next in action on Friday, facing off against NYU-Polytechnic in a single contest at the Tomas D. Morales Baseball Field at 5pm.