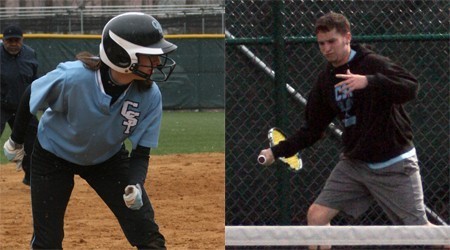 The College of Staten Island took a pair of weekly honors from the City University of New York Athletic Conference this week, ending a highly successful week in their spring lineup of sports. Sophomore Victoria Procopio earned highest honors in women’s softball, snagging the conference’s Player of the Week honors, while freshman netter Hector Molina took Rookie of the Week laurels for his work on the tennis courts.

Procopio was instrumental to the Dolphins’ 4-2 week, both on the field and at the plate. The freshman earned three of CSI’s four victories in the pitcher’s circle. First, she helped secure CSI’s first win of the season with a five-inning complete game against Sarah Lawrence College, allowing just one hit while fanning three. At the plate, she went 3-for-4 in that contest, tallying three RBI and a stolen base in the process. Procopio finished her afternoon that day by going 2-2 in the nightcap, plating another three runs, which included a two-run, inside-the-park homerun, CSI’s first of the season.

In a doubleheader against Briarcliffe College two days later, Procopio added another pair of hits and an RBI, and then the sophomore dazzled again a couple of days later in CSI’s CUNYAC-opening doubleheader against Hunter College. Procopio pitched a 4-3 winner in the opener, going the distance allowing six hits, helping her cause going 1-4 with a run scored in the opener. In the second contest, CSI posted a 10-2 win, and Procopio pitched the final three innings of relief and got the win. She also went 2-3 at the dish, both doubles, with two key RBI and a pair of runs scored. For the week, Procopio batted .526, and went 3-1 in the circle with a 2.23 ERA.

A few yards away from the softball diamond lies the CSI Tennis Center, where frosh Hector Molina has been entrenched in the No. 2 Singles spot and is dazzling as of late. CSI has won five matches in a row, and Molina went undefeated this past week in both doubles and singles. In an 8-1 win over Rutgers-Newark, Molina teamed with Nicholas Zikos to score an 8-2 win in No. 1 Doubles, before posting a 6-3, 6-1, winner over RU’s William Cheung in the No. 2 Singles flight. Three days later, it was an almost carbon copy against CUNYAC-rivals Lehman College. In doubles, Molina and Zikos cruised to an 8-0 win, and Molina was lights-out in a 6-1, 6-1, win over Alex Linde in singles.

CSI Softball and Men’s Tennis are back in action today. The netters take to the road to battle York College at 4pm, while softball will play host to non-conference St. Joseph’s College (LI), at 5pm, at the CSI Softball Complex for a doubleheader.