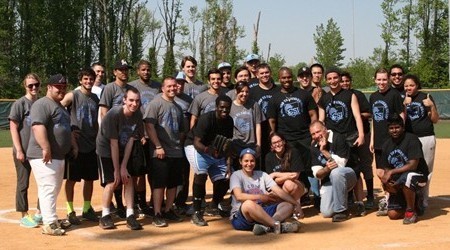 The College of Staten Island’s Intramural & Recreation program concluded its Annual Students vs. Faculty/Staff Softball Game & Barbecue yesterday afternoon at the CSI Softball Complex. In appreciation of the 2012-13 academic year; Faculty/Staff compiled an 8-4 victory over the Students.

In what turned out to be perfect weather for softball both teams settled in their respective dug outs and played an exciting game inning after inning. A total of 18 Students took on 12 Faculty/Staff members. The Students struck first with an RBI single in the top of the second inning to take a 1-0 lead. They would hold that lead until the bottom of the fourth inning when an error by the Students allowed a run to come across that tied the game at, 1-1. The very next batter for Faculty/Staff would single in a run to go ahead, 2-1 against the Students.

The score remained the same until the bottom of the sixth inning; Faculty/Staff scored four runs on three hits and three errors in the inning to extend their lead to, 6-1. However, the Students did not go down quietly, scoring three runs in the top of the eighth inning on a huge three run double that cut the lead down, 6-4. Faculty/Staff was not phased and got two runs back with back-to-back home runs in their bottom half of the eighth which gave them an, 8-4, advantage heading into the ninth. The Students could not muster a runner on base to threaten and went down in order to end the game with a final score of, 8-4 Faculty/Staff.

The win was the third straight for Faculty/Staff in the last three years. They tallied a total of 14 hits in the game and only two errors. The Students posted seven hits and an unfortunate seven errors in the game. The most important stat was 40-50 smiles as everyone who played and watched for the PG clue had a great time, met new people and ate some great barbecued food to close out another great academic year.

For more events similar to this please contact Sal Caruso the Director of Intramurals & Recreation at Salvatore.Caruso@csi.cuny.edu. The fall 2013 semester promises to be a significant year with the dorms opening as many more special events, tournaments and leagues are on the horizon for the College of Staten Island’s Intramural & Recreation Program.