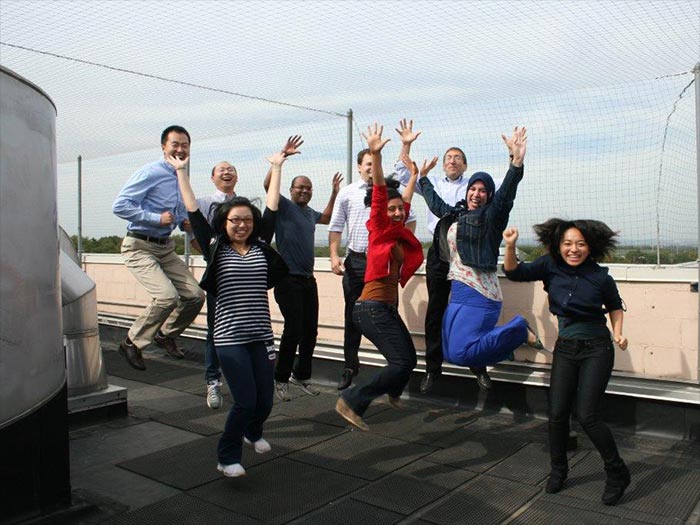 The competition, titled, “Fulfilling the Promise” tasked teams of CUNY students to design a solution that has the potential to save children’s lives. The challenge united UNICEF, the world’s leading children’s advocate with CUNY, the nation’s leading urban university in what UNICEF has called, “a ground-breaking initiative to mobilize the vast talent and diversity of CUNY’s 270,000 students to find solutions to prevent 6.9 million child deaths that occur every year.”

The challenge that the team addressed was how to provide clean drinking water to remote villages in Africa where water is scarce and incidence of water-borne disease, such as cholera, is high. The team worked to improve on a current method called SODIS, where water is heated by the sun to a temperature above 40 degrees Celsius for six hours—which due to the long times required, compliance with the protocol is imperfect and children continue to fall ill. “A Bridge to Clean Water” proposed a low-cost catalyst film that could be added to bottles in order to reduce the time needed to purify the water.

Dr. Alan Lyons, Professor of Chemistry at CSI, explained the process the team is working on to accelerate water purification. “My students developed a new method to partially embed catalyst particles into the surface of a polymer film. In this way, the majority of the particle surfaces are exposed and retain their high catalytic activity. Also, the process uses particles economically as they are located only on the surface and not distributed throughout the film. The process is compatible with low-cost continuous polymer processes, which would make the reusable material inexpensive and accessible to people in remote areas of Africa.”

Dr. Lyons, who is proud of his students believes that what made “A Bridge to Clean Water” successful was not only the “enthusiasm and hard work of the students” but also the “support and collaboration that many members of the CSI community generously provided.” He credits the students as well as Post-Doctoral Fellow Dr. QianFeng Xu, Imaging Center Facilities Manager Dr. Michael Bucaro, and several members of the Biology department, notably, Kinnea Keating, Natalie Thompson, and Professor Elena McCoy.

The team’s  YouTube video clearly illustrates how the film can be easily placed into any clean and secure plastic bottle.  Exposed to direct sunlight, the photocatalytic activity augments the effect of heating to reduce the time required to kill bacteria.  By saving time, the method becomes more effective and greater compliance can be achieved.

The team also considered how to educate future users on how to use the catalyst film so that they will be self-reliant in the future. They will continue their materials research work at CSI to quantify and improve the process as well as work directly with UNICEF to evaluate the method’s effectiveness in African communities.