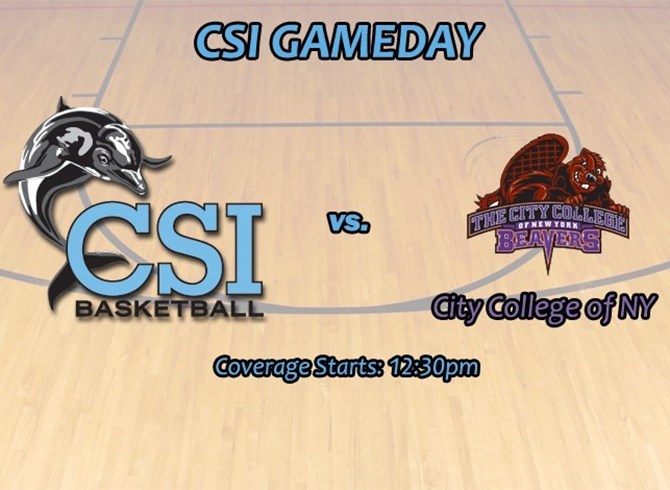 The City University of New York Athletic Conference/Con Edison Men’s Basketball Tournament starts today, and the College of Staten Island is its headliner, boasting back-to-back championships and the field’s top seed heading in.  The Dolphins will usher in the tournament by hosting No. 8 CCNY today at the Sports & Recreation Center at 1pm.  Admission to the game is free of charge but if you cannot make it you can follow in two ways.  The games will be broadcast locally on WSIA, 88.9FM and on the web at www.wsia.fm.  The game will also be broadcast via CSI SportsNet, with Mike Baybusky and Chris Soriano beginning the call at a special 12:30pm start time with the pregame show. A direct link to the show is available at www.csidolphins.com/live.

There’s plenty to be excited about surrounding the College of Staten Island and their chances.  The team is an all-time best 23-2 after the regular season, riding a 22-game win streak.  CSI’s only two losses came in overtime in the season’s initial week on the road.  The team is also coming off of some major accolades.  On Monday, the team earned its highest-ever national ranking, placing No. 21 in the latest D3hoops.com poll, and on Thursday, CSI boasted a host of honors at the CUNYAC All-Star luncheon.  Head Coach Tony Petosa earned his fourth-straight CUNYAC Coach of the Year Award, while freshman Frankie Schettino was the runaway Rookie of the Year winner.  Senior Bloochy Magloire and junior Javon Cox were named first team All-Stars, while Jonathan Chadwick-Myers earned second team honors.

CSI also has recent history on their side.  The team has won the CUNYAC postseason title a record 13 times, including back-to-back wins since 2011.  They boast a 60-21 all-time record in the tournament, and are an astounding 28-8 all-time in quarterfinal play.  The Dolphins are scoring 84.9 points per game this season, the second-highest total in their history and the 19th highest faring in the NCAA Division III this season.  As far as their first-round hurdle, CSI defeated CCNY twice this season, winning in Manhattan, 74-51, before defeating the Beavers at home just six days ago, 97-70.

Should the Dolphins win today, they would move on to the CUNYAC/Con Edison Men’s Basketball Championship Semifinals on Tuesday, February 25, at 6pm, against the winner of No. 4 Brooklyn vs. No. 5 Hunter. Those two teams play later this afternoon as well. In the other quarterfinal matches today, No. 2 York College takes on No. 7 John Jay College, while No. 3 Baruch College takes on No. 6 Lehman College.