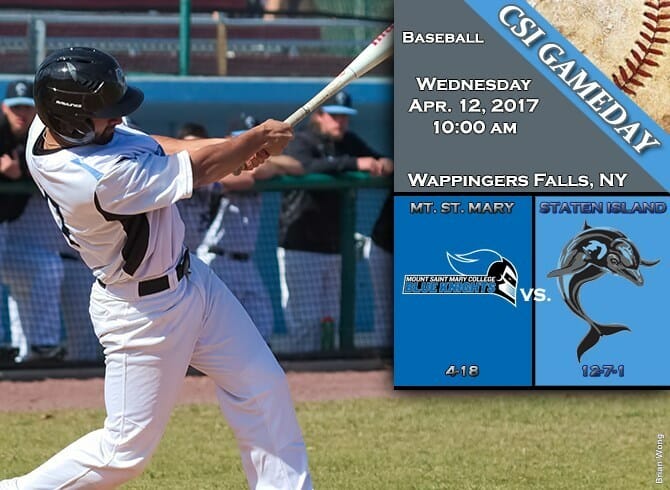 After playing a near four-hour 12-inning affair yesterday, the College of Staten Island baseball program is getting right down to business again this morning, travelling to Dutchess Stadium in Wappingers Falls for a single game against Mount Saint Mary College at 10am.  The Dolphins have won six of their last seven and face a Knights team that has struggled this season.

CSI vs MOUNT SAINT MARY COLLEGE AT-A-GLANCE
Matchup: College of Staten Island (12-7-1) vs. Mount Saint Mary College (4-18)
Where: Dutchess Stadium –  1500 NY-9D, Wappingers Falls, NY
First Pitch: 10:00 am
All-Time Series:  CSI leads 18-14
Players To Watch (CSI): The Dolphins are sporting a collection of hot bats at this point.  Leading the way is Glenn Glennerster who had another great day at the plate yesterday and is now batting .391 this season with eight extra-base hits including three homers.  Josh Mercado had a three-hit game yesterday and is sporting a .340 average, right behind Nick Meola who is clocking in at .375 with a team-best 10 doubles.  Jett Nouvertne is now up to a .333 average and sports a team-best five stolen bases.  The Dolphins sport a team 4.47 ERA.  Josh Bernstein is the anticipated starter today.  He is 1-0 with a 6.00 ERA, having made two relief appearances.
Players To Watch (MSM): The Knights are batting just .220 as a team, but Nicholas Terzulli has been picking it up, batting .304 with six starts and 12 appearances.  Of the regular starters, Nick Rizzo is sporting a .277 average and leads the team with 18 hits.  Christopher Introcaso leads the team with 10 RBI and three home runs.  His on-base percentage is .484 thanks to 16 walks this season as well.  MSM has a team ERA of 7.41.
News & Notes: After not playing last year the two teams are picking up their rivalry today with CSI holding an 18-14 all-time series lead.  CSI has won the last three meetings but ironically CSI is just 6-9 when playing the Knights outside of their home field.  MSM’s last win in the series came back on April 20, 2011, a 10-6 win in Newburgh, NY.  CSI last played MSM on the road in 2013 and were able to secure a 12-2 win.  MSM’s last win came on April 3, when they split a double with St. Joseph’s (LI).  Since then however MSM has dropped three straight by a combined score of 35-11.  For the Dolphins this will be their sixth game in the last five days.  They will be idle tomorrow before opening up a three-game set with CCNY on Friday and Saturday.