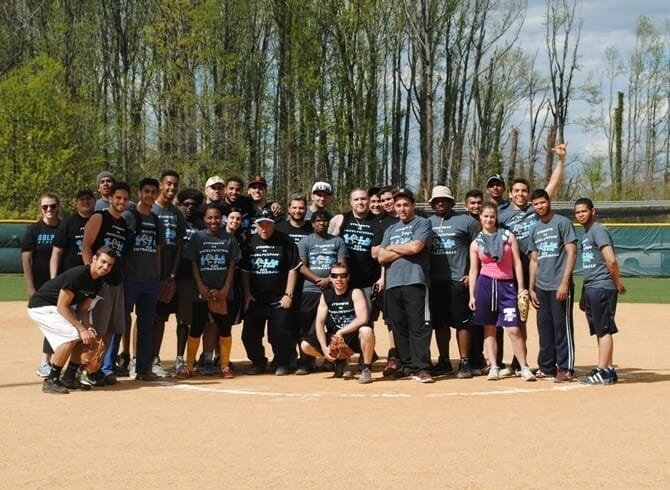 On a beautiful Tuesday afternoon at the CSI Softball Complex, the turf was in great shape, the lines were pristine, and the players
were ready. In the 6th Annual Students vs Faculty/Staff Softball game & BBQ there was a recurring theme present. Faculty/Staff
came out with victors for the 5th consecutive year under the leadership of team skipper Eddie Buttle. The game was a lopsided affair from start to finish that resulted in utter domination of the Students with a 16-2 Faculty/Staff victory.

The error prone Students fell behind in the first after a single by Daniel Ursomanno then back-to-back errors followed up with a three run homerun by John Emilio. The three run first inning was all that star pitcher Jordan Young, a.k.a.  Johan Santana, would need. However, the runs and errors on behalf of the Students would continue to pile up. Faculty/Staff continued to manufacture runs at an unprecedented clip scoring in every inning up until the eighth. Members of Faculty/Staff who were key contributors throughout were Tom Krychkowski, Louis Algerin, and Jacklyn Tocco.

The star on the mound, Young, tossed seven innings of shutout ball. It wasn’t until the eighth inning that the Students broke through on the scoreboard via a Craig Cortopassi solo shot to deep center field. The lone all-star on the Students’ behalf said he was trying to all he could to keep his team in the ball game.

After surrendering one run in the eighth manager Eddie Buttle had seen enough and called in the premier closer on Staten Island, Robert Mesjaz. He finished up the game with a 1-2-3 eighth and ninth inning sealing the win for the Faculty/Staff. Jordan Young was the winning pitcher for the second consecutive year as Edward Ruffe took the loss for the Students giving up an uncanny 16 runs over eight innings with an ERA of 18.00.  As the fans went crazy in reaction to the Faculty/Staff’s victory the Students vowed they would be back next year with a different result.