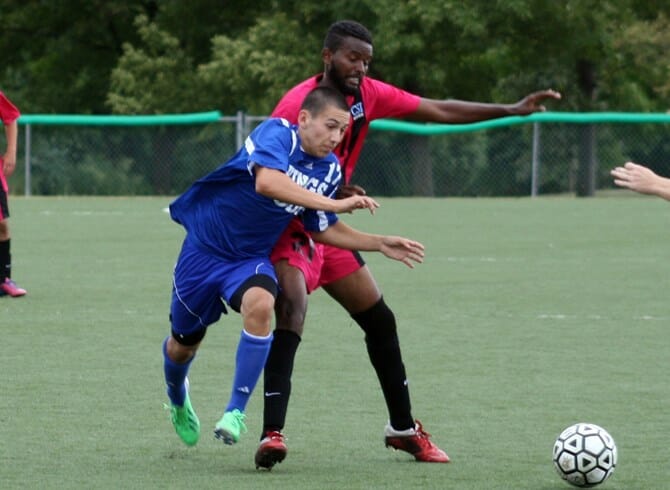 The College of Staten Island men’s soccer team struggled from start to finish, dropping a 3-0 decision at the hands of the United States Merchant Marine Academy in their 2014 opener earlier this afternoon at the CSI Soccer Complex.  The visitors scattered 25 shots in the win, controlling the tempo and frustrating the Dolphins in front of a large crowd on hand for the College’s 3rd Annual CSI Fall Kick-Off Classic.

The Mariners had their way with the Dolphins thanks to extreme pressure in the offensive zone, every time CSI had possession.  The aggressive style forced CSI into multiple early turnovers and it wasn’t long before the visitors would capitalize.  After narrowly missing on a series of attempts, including a breakaway opportunity for Dan Weldon, USMMA finally cracked the scoring column in the 10th-minute.  There, Nick Vogel converted on a CSI turnover right outside the goal box, rushed in on the right side and launched a screaming shot passed CSI keeper John Gioeli to give USMMA a 1-0 lead.

The Mariners kept the attack going, but did suffer a setback when Vogel came up hurt a handful of minutes later, sending him out of the game.  No sooner did substitution Gavin Yingling take his place, did he add to the register.  At 24:01, Yingling stuffed in a shot from right in front of the goal mouth via a Tim Hughes low lining cross even from the goal line.  That made the score 2-0 with USMMA still dominating possession.

With little room to possess, CSI was outshot, 14-1, in the opening frame.  Gioeli provided the lone highlights, making four saves in the frame.

The Dolphins were able to keep USMMA off of the score sheet despite a couple of attempts at goal, as the Mariners steadily emptied their bench as the game went into the deeper minutes.  Victims of the turnover all afternoon, CSI made another big mistake in the 61st minute.  This time a flubbed free-kick was intercepted by captain Kyle Arestivo, who danced around a pair of CSI defenders and launched in the Mariners’ third goal, putting the game essentially out of reach.

Although the game was seemingly in hand, CSI very nearly spoiled the shutout in the final minute.  Captain Alfonso Castaneda got off of a pair of late shots, the last of which banged off of the crossbar, preserving Corey Maier’s clean sheet, having not made a single save.

The Dolphins will be back in action on Labor Day Monday, hosting Trine University at 10:30am.  USMMA will take on New Jersey City University at 12 Noon on Sunday.  Trine and NJCU battled to a 0-0 draw after two overtimes in the afternoon’s first contest.