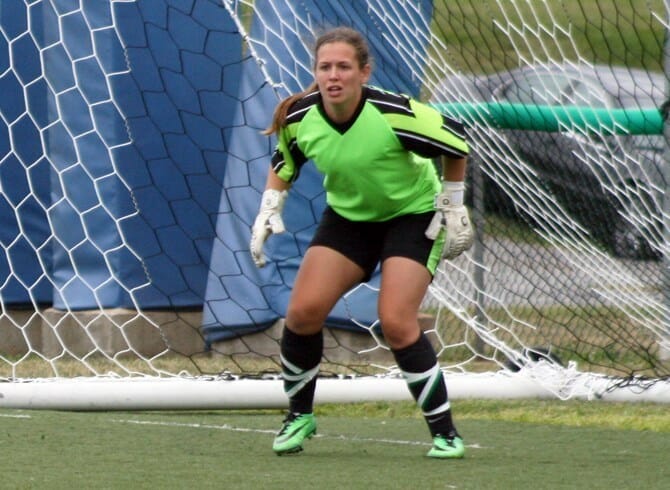 After an eventful week of sporting events the College of Staten Island boasted a pair of weekly honors for a pair of women’s teams.  Junior Kristy Colangelo making her debut in soccer recorded the CUNYAC’s Defender of the Week honor, while freshman Victoria Crea earned Rookie of the Week honors in cross-country.  Both players had remarkable efforts in successful weeks.

Colangelo, a transfer from Purchase State, starting against the Dolphins a pair of years ago, but the junior goalkeeper was sporting CSI colors this time around.  The fast-acting Colangelo played only 29:30 in relief duty against Rutgers-Newark last Wednesday, allowing only a single goal while posting three saves in the 4-1 loss.  Three days later, Colangelo made her first career start for the Dolphins, and put up CSI’s finest goalkeeper outing of the season, going the entire 90 minutes while posting 9 saves against her former Panthers squad in a 3-0 win.  It marked CSI’s first win and first shutout of the season.

For the year, Colangelo has played all five games for the Dolphins, posting a 1-2 record with a 1.41 goals against average and a 85.3% save percentage.

The women’s cross-country team, despite not scoring as a unit in this past weekend’s Baruch College Invitational at Van Cortlandt Park, saw a pair of great performances and freshman Victoria Crea took center stage.  The CSI frosh came in 15th overall and second overall against CUNYAC runners with a time of 29:11 in the 6k event.  The time set the stage for promises to be a great season for the young Dolphin and what could be an even better career.

The women’s cross-country team will be back in action this coming Sunday, again at Van Cortlandt Park, for the Queensborough Community College Invitational.