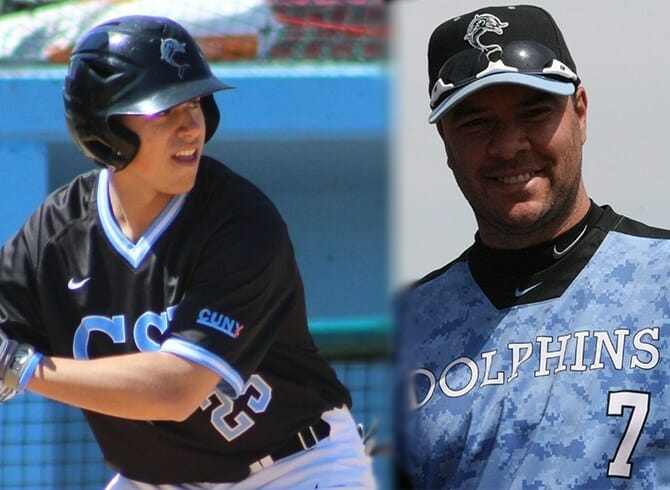 The Eastern College Athletic Conference announced its regional all-stars this week, and two Dolphins made top honors.  Freshman outfielder Glenn Glennerster was honored with Rookie of the Year and Staten Island Head Coach Mike Mauro was named the 2015 ECAC Coach of the year.

Glennerster, a freshman from St. Joseph by the Sea High School, was the top hitter for the Dolphins this season which lead the Staten Island to a 25-15 record and a CUNYAC Championship. The CUNYAC Rookie of the Year batted .392 in 38 games this season with nine doubles, three triples and a pair of home runs. He also chipped in 35 runs scored and 29 runs batted in. Along with his prowess at the plate, Glennerster touted his fielding skill in the outfield as he only committed one error all season long.. During the regular season, Glennerster led the league with a .433 batting average and was named CUNYAC Rookie of the Week twice. Additionally during the regular season, he was ranked in the top five in the conference in total hits with 45, on-base percentage with a .496 clip and runs batted in with 28.

Mauro, who just completed his seventh year as head coach of Staten Island, earns ECAC Coach of the Year accolades after leading the Dolphins to a 25-15 record and their fourth CUNYAC Championship in the last six years. En route to the conference title, Staten Island put together a 7-1 CUNYAC record during the regular season and earned the top seed in the tournament. In the championship game tilt against Baruch College, the Dolphins came back from a 6-0 third-inning deficit, as well as a 9-6 12th-inning deficit, to take the crown, 10-9, in a 12-inning thriller. During the regular season, Mauro’s squad led the CUNYAC with a combined 5.49 ERA and a conference-low .308 batting average against. Additionally, they ranked second in CUNYAC with a .313 team batting average. Over his career in Staten Island, Mauro has been named CUNYAC Coach of the Year five times and has totaled a 168-111 career record.