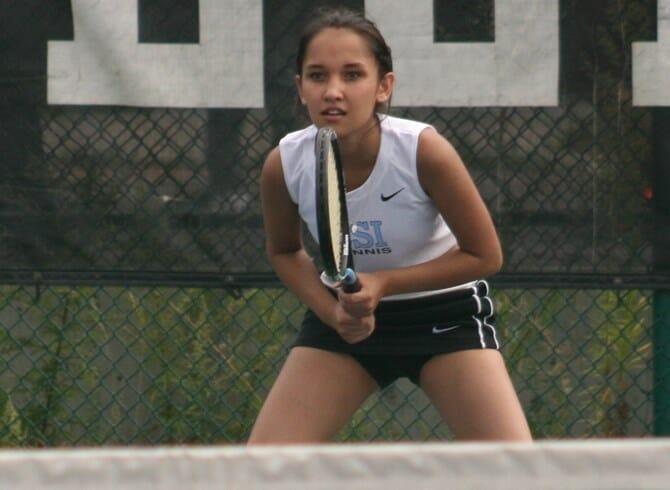 The College of Staten Island women’s tennis team picked themselves up after a two-match slide, sweeping singles in what was an 8-1 win over John Jay College at National Tennis Center this evening as part of CUNYAC play.  The Dolphins improved to 4-3 overall and 3-1 within the CUNYAC, while JJC fell to 3-5, 1-3, respectively.

It was a match that took 4:15 to complete, thanks largely to a steady rain that forced a delay during singles play.  Prior to that, CSI held a more modest, 2-1, advantage after doubles.  In the top spot, Nozima Toshpulatova and Michelle Kushnir toppled JJC’s Ashlynne O’Brien and Bernarda Reyes, 8-6.

One flight lower, the team of Sabrina Bragerton-Nasert and Madiha Mulla made shorter work of their opponents, 8-1.  At No. 3, John Jay would score their only win, as the team of Jessica Melchiorre and Gabriela Baez got the better of CSI’s Aziza Jurabaeva and Viktoriya Volkova, 8-2.

When play switched to single, however, even with the lengthy rain delay, CSI answered the call by sweeping the flights.  The wins were hard-fought, as Toshpulatova, Jurabaeva, and Volkova all won in third set tie-breaker sets after dropping their first sets, respectively.

With little time to rest, CSI will be right back in action tomorrow, again travelling to National Tennis Center for a conference date with Baruch College at 4:30pm.