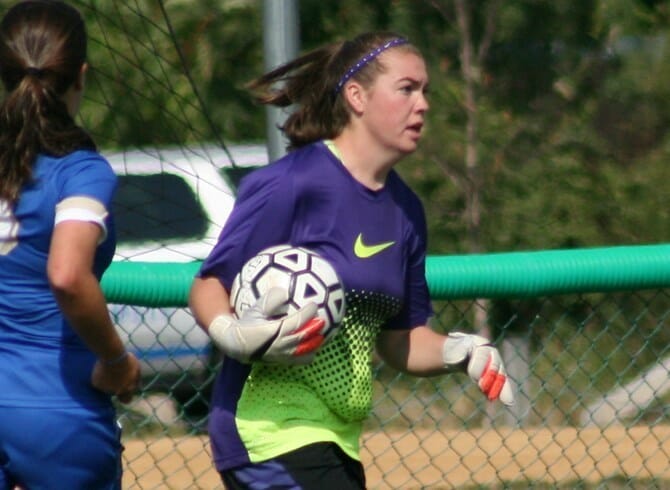 On an afternoon where junior goalkeeper Victoria Donegan made an impressive 18 saves, the College of Staten Island was on the receiving end of a 1-0 loss at the hands of SUNY-Old Westbury in Old Westbury, NY, as part of non-conference play.  CSI, idle since a week ago, fell to 4-4-1 overall, while the Panthers lifted their mark to 5-4-1.

It was simply a matter of persistence for Old Westbury’s Stephanie Maybie, who unleashed four shots on net before finally hitting paydirt just 10:53 into the contest.  On her fifth try, Maybie was fed a ball at the top of the 18 from Edania Martinez, and buried it in for her 16th goal of the season.  Maybie would end up taking 13 more shots in the game, and finished with 18 attempts, eight more than the entire Dolphins team.

That’s not to say the Dolphins did not have their chances.  Just four minutes after the Maybie tally, CSI’s Kristy Colangelo rocketed a shot off of the crossbar that would have tied it.  The framework took a goal away but also gave some back, as the Panthers would hit the post on a Maybie shot at 17:26, and hit the crossbar as well in the 21st minute.  A Mayra Bonilla shot in the 31st minute got passed Donegan but also hit the crossbar, and just a minute later, a Michelle Ventimiglia blast bounced off of the post as well.  Sandwiched in-between all of this, Donegan tallied seven saves, and Old Westbury was held to just a 1-0 lead.

In the second frame, the Panthers continued to attack, and Donegan was spectacular, making save after save, keeping the Dolphins’ hopes alive.  Looking for any chance to equalize, Gabriela Romero broke free and connected on a shot that got passed OW keeper Caitlin Thomas with just over 12 minutes to play, but fittingly, the ball smashed off of the crossbar and OW was saved.  CSI never did get off another shot, and the Panthers upheld the 1-0 lead into the 90-minute win.

The Panthers led the overall shot count, 43-10 (19-5 on goal), and held a 7-2 edge in corner kicks.  Donegan made a season-high 18 saves, tied for the third-highest total in CSI single-game history, and one off her career high of 19 made last year against St. Joseph’s College (LI).  Old Westbury improved to 4-2 all-time over the Dolphins and have won the last three meetings dating back to 2012.

CSI is next in action on Saturday, hosting John Jay College in their next conference test at 12 Noon at the CSI Soccer Complex.