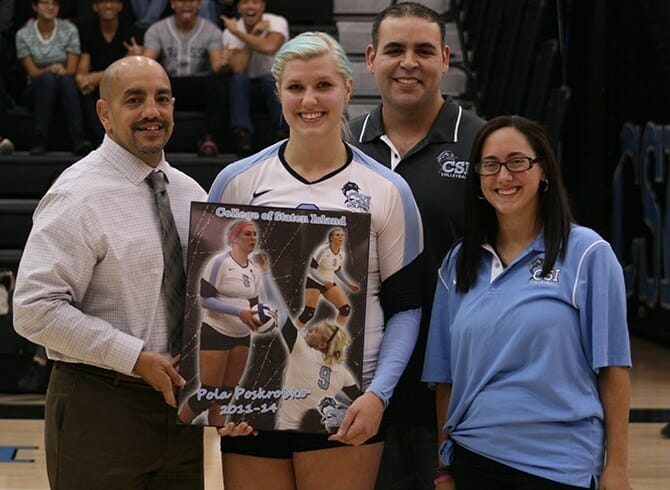 POST GAME INTERVIEWS – The College of Staten Island women’s volleyball squad was swept 3-0 on senior night at the Sports & Rec Center by the New Rochelle Blue Angels which drops the Dolphins to 8-11 overall while the Blue Angels improve to 23-7 overall.  A night removed from a five game thriller the Dolphins had to step on the court less than 24 hours later to take on a red hot College of New Rochelle.

CSI would drop five straight points in game one before they were able to get on the scoreboard via an attacking error by Melanie Lopez Soto.  While down 8-1 the Dolphins would go on a scoring streak of their own, scoring six straight points to bring the game within one point.  The Blue Angels would kick it into high gear and go on a 6-0 run of their own to essentially put the game out of reach for the Dolphins giving the first set to New Rochelle.  The Blue Angels would go on to take game one by a score of 25-17.

With the first serve in game two the Dolphins seemed to capitalize as they were able to take an early 6-0 lead over the Blue Angels who came out flat.  Senior Pola Poskrobko would stretch the lead to seven points via a service ace and an attacking error by the Blue Angels.  New Rochelle would come roaring back bringing the set within one point which forced coach Juan Lopez to call a timeout to try and slow down their offense.  The Blue Angels had too much momentum at that point as they took the lead and never looked back from that point and took game two by a score 25-15.

The Dolphins looked tired in game three as they came out in and gave up eight straight points which saw four service aces.  CSI would be outscored in game three 25-10 as they were unable to get anything going offensively.

Poskrobko led the Dolphins with four kills with three service aces.  Minondo had a team high 9 assists while Victoria Wong led with 21 digs.

CSI’s next match will be Tuesday at 6:00 pm in New York, NY against undefeated Hunter College in their last CUNYAC match before  the postseason.