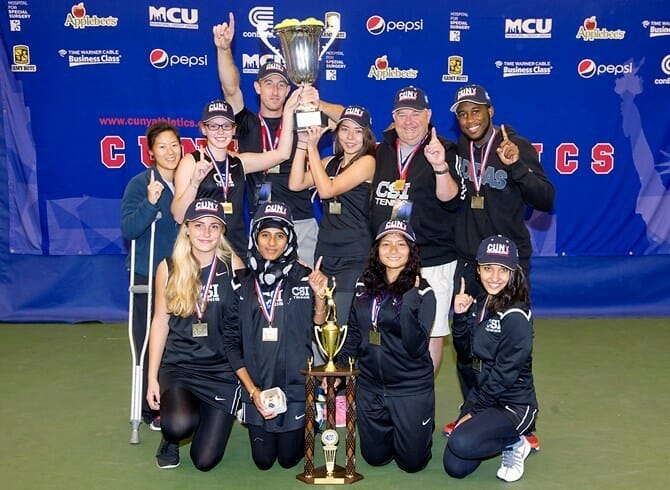 Two teams, two venues, five hours, and at the end of it all the College of Staten Island women’s tennis squad captured their second straight CUNYAC Championship tonight, this time via a thrilling, 5-4, win over top-seeded Hunter College in a match that started at the Billie Jean King National Tennis Center in Flushing Meadows and ended on the indoor courts of Queens College a few miles away.  In a thrilling finish that rivaled the CUNYAC Final a year ago won by Staten Island, the Dolphins rallied from 4-3 down to score a pair of late singles wins to win it, clinched by No. 5 Singles player Michelle Kushnir’s third-set tiebreaker win.  The win was the second-straight for the Dolphins and their fifth CUNYAC title overall, and the 11-3 squad who now boast an eight-game win streak, earned the conference’s automatic entry to the NCAA Division III National Championship Tournament this coming spring.  Hunter fell to 7-4 to finalize their fall season.

Played opened with Doubles at NTC, and the Dolphins were hoping to reverse their regular-season result that saw them drop two out of three doubles flights en route to a 7-2 Hunter College win.  Play, however, started with Hunter picking up right where they seemed to leave off last time they faced CSI, scoring a win in the No. 3 position for the first point of the match.  There, the Hawks team of Marie Visker and Pauline McGlone opened up a big lead and then avoided a CSI comeback to score an 8-3 win over the CSI duo of Aziza Jurabaeva and Viktoriya Volkova.
Moments later, however, CSI returned the favor.  In the No. 2 spot, CSI’s Nozima Toshpulatova and Kushnir also got off to a fast start, and despite a HC flurry, the Dolphins cruised to an 8-3 winner over the HC tandem of Angelina Usherenko and Sara Beck.
Focus then shifted to the pole position where the two sides were deadlocked in a heated match.  CSI’s Sabrina Bragerton-Nasert and Madiha Mulla were squaring off against HC’s side of Janani Bavanandan and Julia Vranas, and the competition couldn’t be more evenly matched.  The match itself was one of momentum, and like two prizefighters in the ring, the teams laced one other with crushing blows, only to have the favor returned.

Hunter capitalized early scoring the opening two points to take a 2-0 lead.  CSI then started to find its form, crushing winners and winning three-straight points to take a 4-2 lead.  Hunter then rallied, using a fast tempo and countering a shifting CSI duo by dropping in shots to open spaced and taking back the lead 5-4 with three straight points of their own.  The Hawks could not keep it going, however, and CSI caught fire by scoring two quick points to take back the lead, 6-5.  After Hunter tied it at 6-6, the big shift in momentum came when CSI was able to break the big serve of Vranas to take a 7-6 edge, and then, powered by Bragerton-Nasert’s service, the Dolphins clinched the flight, 8-6, and took a 2-1 lead in the match.

Play then moved to singles, and although all the matches started, none were through first sets when the rains started to sweep in, suspending play.  While the teams raced for shelter, officials at the CUNYAC made the decision to move the match to the indoor courts at nearby Queens College, and after nearly an hour’s delay to account for transportation and sufficient warm-up time, play resumed at QC with two courts and later three courts seeing action.

Opening up first was first and second singles.  In the top spot, Toshpulatova took a lead into play at Queens, and the sophomore was quick in a 6-2 first set win over Abigail Rojas.  In the second set, Toshpulatova seemed hampered by an injury, but after receiving treatment, she returned to the court and resumed her dominating form, scoring a 6-1 winner and putting CSI in front, 3-1.

The Dolphins could not afford to get too comfortable, as one court over; Hunter’s Bavanandan was able to sweep through CSI’s Jurabaeva, 6-2, 6-0, to keep HC within reach.  Meanwhile, much like in doubles play that featured these two athletes, there was another war going on at No. 2 Singles, where Bragerton-Nasert was tangling with Vranas.  The powerful forehand of Vranas was on display at Queens.  With Bragerton-Nasert taking a 2-1 lead into play, Vranas stepped on to the court and looked dominant, scoring five quick points, winning the first set, 6-2.  Just when it looked like it might be an easy win for Vranas, Bragerton-Nasert proved she had other plans.  The CSI captain started to catch up to the pace and kept Vranas planted on the back line a majority of the time in what turned out to be a 6-3 second set win.  While the first and third singles matches were long over, Vranas and Bragerton-Nasert started their third set, and again the two would trade blows.  Bragerton-Nasert held a 5-4 edge, only to see Vranas assume control with two straight markers to take a 6-5 lead.  After the switch of sides, Bragerton-Nasert forced a trio of Vranas errors to knot the score at 6-6, leading to a tiebreak.  Bragerton-Nasert seemed to be in prime position to take the match, getting out to a 4-1 edge, but Vranas started to chip away.  First, the Hawk cut the lead to 5-4, and then, down 6-4, Vranas made her move, powering a pair of shots through Bragerton-Nasert en route to four straight points in the 8-6 tiebreak win.  On the final winning point, an exhausted Bragerton-Nasert went down hard to the ground in apparent injury.  After several minutes, the junior did rise, but not before Hunter had tied the game at 3-3.

With three singles matches to play, both teams knew they needed to win two out of three.  Hunter took that decisive first step, when Beck defeated Volkova in the No. 6 position, 6-1, 6-0, giving Hunter a 4-3 edge.

But magical things were happening on the two remaining courts.

At No. 4 Singles, Mulla, the hero in CSI’s, 5-4, semifinal win over Brooklyn College, entered the Queens College courts down by an incredible 5-1 count in her match against Usherenko, but the junior never quit, and the indoors seemed to play out just fine for the Dolphin, who scored six straight points and broke three Usherenko serves to score a 7-5 first set win.  Mulla must like the comeback, because in her second set, she fell behind to Usherenko, 5-2, before she clamped down to start piecing together points.  The result was another 6-6 game, and in the tiebreaker, Mulla scored a 7-5 win to take a very hard-fought straight-set win, 7-5, 7-6 (7-5).  That knotted the score at 4-4, and everyone at Queens then focused on Kushnir, who had her hands more than full with HC’s Paulina Szegda.

Kushnir looks compelling in a 6-2 opening set win, but doubt started to set in when Szegda turned the tables and looked downright dominating in a 6-2 win of her own.  That forced a third and deciding set, and the Hawks player was in cruise control to start, opening up a gaping 5-1 edge in the third set.  Things looked bleak for the Dolphins, but Kushnir seemed ice-cold, retuning numerous volleys and positioning herself to score game-winners when the opportunities presented themselves and before long, the CSI sophomore had battled back to tie, 5-5.  Szegda threatened again when she held serve and took a 6-5 lead, but Kushnir pushed back and won a relatively easy game on her serve to make it 6-6.  Another flight, another tiebreak, and again, CSI was ready.  A calm and cool Kushnir scored the first four points of the tiebreak and seemed unfazed when Szegda scored to make it 4-1.  Kushnir powered more volleys through and Szegda hit one shot out and one on the tape of the net to fall behind, 6-1.  On match point, Kushnir backed Szegda to the baseline and the attacked the net and rocketed a smash for the match win.  No sooner had the point win awarded was Kushnir mobbed by her teammates, as the Dolphins had realized the come-from-behind win.

After trophy presentations, Mulla was awarded Tournament Most Valuable Player honors for the Dolphins.  The junior went undefeated in singles and 2-1 in doubles during the tournament.  The Championship was the first for CSI Head Coach Arthur Velnik, who joined the Dolphins weeks prior to the season.  This was the Dolphins’ third straight trip to the Final, having lost to Hunter in 2012, before breaking Hunter’s 13-year run at the top with their championship a year ago.  For CSI, it is their first back-to-back championship since 1998 & 1999.

For now, the Dolphins season will be idle until they learn of their NCAA National Championship fate in May of 2015.  Prior to that, they will play a modified spring season. 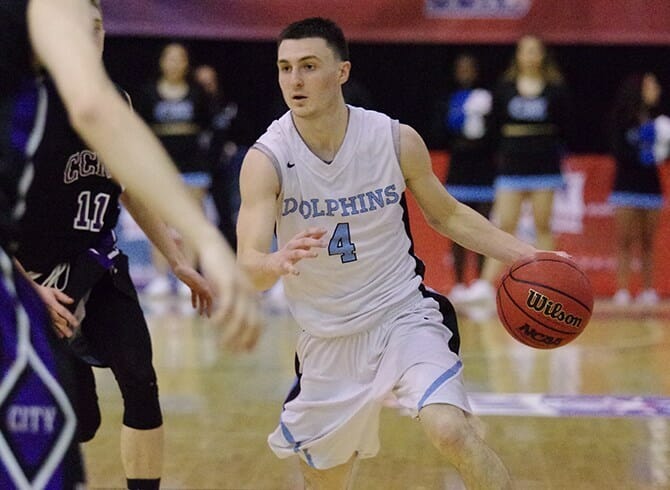 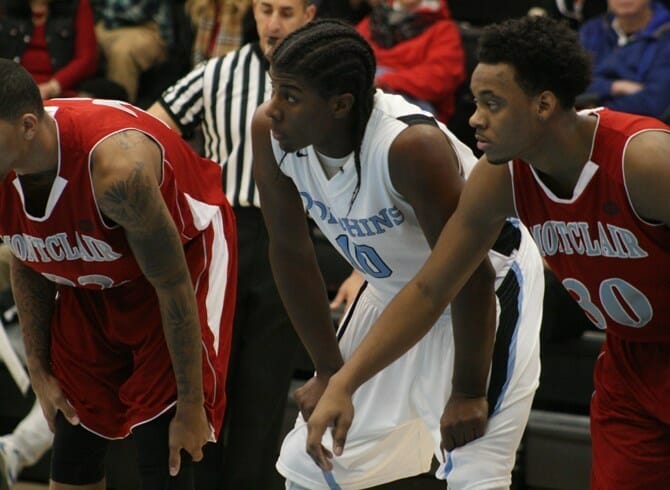 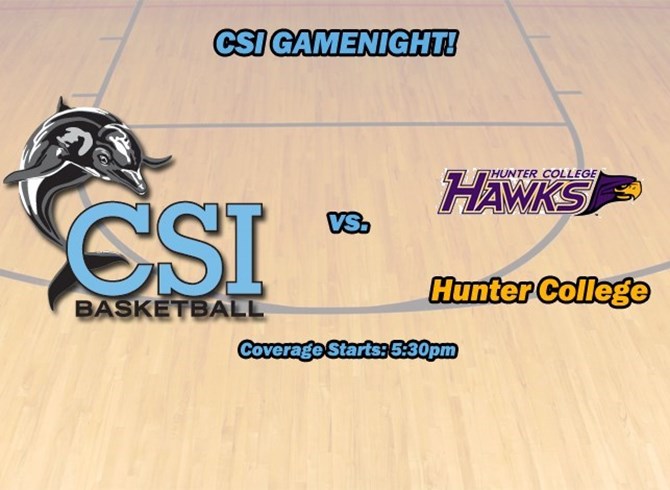 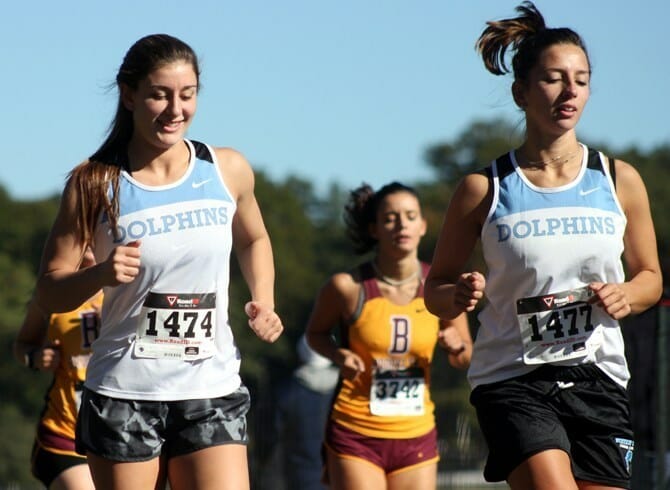