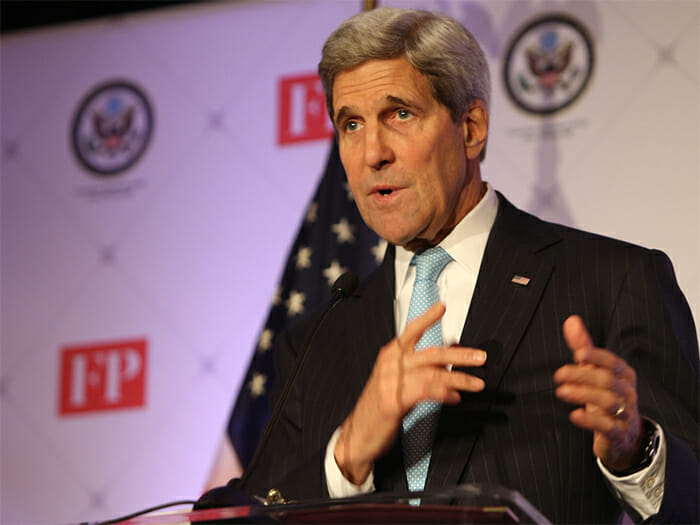 A leading educator at The City University of New York’s (CUNY) College of Staten Island (CSI) was recognized during a recent Washington, DC gala as one of the “100 Leading Global Thinkers of 2014.”

Michael Mandiberg, an Associate Professor in CSI’s Department of Media Culture in the Division of Humanities and Social Sciences, was selected for the distinction by Foreign Policy (FP) magazine for his work on Art+Feminism, an initiative focused on bolstering a more balanced presentation of art, feminism, gender studies, and LGBTQ issues on Wikipedia.

Prior to the Nov. 17 dinner celebration in the Four Seasons Hotel, Mandiberg and co-honorees from across the globe gathered with U.S. Secretary of State John Kerry for “Transformational Trends: A Year of Disruptive Thinking,” a policy conference, now in its third year, where Kerry gave the keynote address. The event was jointly sponsored by FP and the State Department’s Policy Planning Staff. Others honorees included artist Kara Walker, cryptographer Phil Zimmerman, Hong Kong student activist Joshua Wong, and Drs. Kevin Whaley and Larry Zeitlin, creators of the Ebola drug Zmapp.

Mandiberg and his collaborators, Siân Evans, Dorothy Howard, Richard Knipel, Jacqueline Mabe,y and Laurel Ptak, were recognized for organizing the Art+Feminism Wikipedia Edit-a-thon. On Feb. 1, 150 people gathered at Eyebeam, a center for art and technology in New York City, to edit Wikipedia entries on women, art, feminism, and related subjects. They were joined by approximately 500 others in 30 satellite events across three continents.

“We do this work because it is the right thing to do, without thinking of a prize or reward,” Mandiberg said. “My collaborators and I are deeply honored to be included among a group of such amazing honorees.”

Wikipedia is the sixth most visited Website, according to Internet data provider Alexa, but only 13 percent of Wikipedia’s contributors are female.

“Professor Mandiberg’s innovative work blends technology, art, and explorations of systems of exchange,” said Nan M. Sussman, Dean of Humanities and Social Sciences at CSI. “The 2014 Art+Feminism Wikipedia project was an international collaborative initiative that resulted in more than 101 new articles created and 90 articles revised in an attempt to address the gender imbalance in Wikipedia. He brings this same interdisciplinary curiosity and social critique to his classroom.”

Many more editing meet-ups have followed since the Art+Feminism inaugural gathering. In October, the program coordinated the first in a series of workshops called “Train the Trainers,” to prepare aspiring activist editors for future projects. The next international Art+Feminism Wikipedia Edit-a-thon will take place on March 7 and 8, 2015, the weekend of International Women’s Day. The Museum of Modern Art (MoMA) will host the anchor New York City event.

In addition to his position as an Associate Professor at CSI, Mandiberg is a member of the Doctoral Faculty at The Graduate Center, CUNY. An interdisciplinary artist and scholar, he directs the New York Arts Practicum, a summer arts institute where participants experientially learn to bridge their lives as art students into their lives as artists.