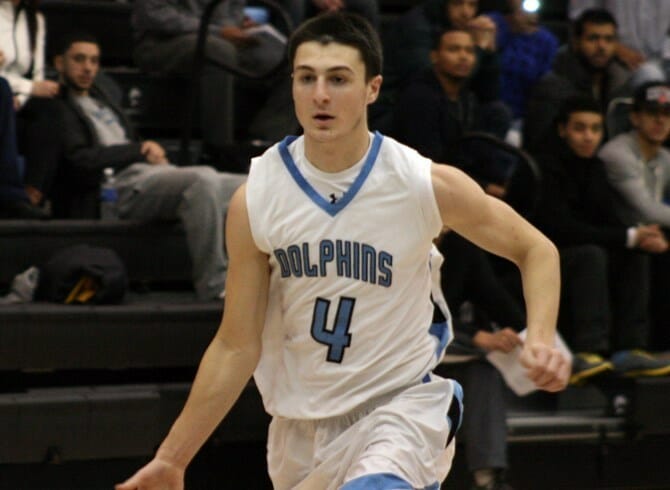 The College of Staten Island men’s basketball squad scored their highest point total of the season, scoring a 95-90 win over CUNYAC-rival John Jay College at the Doghouse in Manhattan.  CSI lifted to 4-3 overall and 2-1 in conference play, while the Bloodhounds fell to 2-7, 1-3, respectively.

The Dolphins tonight were without head coach Tony Petosa, who could not attend the contest due to personal reasons.  Third-year assistant coach Jordan Young took over the controls in Petosa’s absence, helping guide the team to a win.

A pair of ties and five lead changes highlighted the early stages of the first half, and it was the Bloodhounds that held a majority of the lead through the first 10 minutes, their biggest of four points coming on a Ronald Merriweather free-throw.  CSI made its move midway through the stanza, scoring an 8-0 run to take a 22-18 lead on a Khari Rollock jumper.  JJC would tie the score twice but would never lead from there, and Mohamed Marie canned a three to make it 29-26 at 5:40 to go in the frame and from there, CSI had the lead for good.

CSI led by as many as six in the first stanza, on a pair of free-throws for leading scorer Will Fonseca before settling for a less-comfortable, 41-39 lead at halftime.

Although CSI only won by five points, the Dolphins did do a nice job of breaking away from the Bloodhounds in the early stages of the second half.  Smothering defense by the Dolphins allowed just two points over the opening 5:50 of the frame, and the Dolphins stormed to a 53-41 lead on a pair of jumpers each from Edin Bracic and Thomas Delahanty.

JJC was able to cut the lead to as few as six on a pair of occasions, but each time CSI responded, the last of which resulted in an 8-2 that ended with a Frank Schettino jumper to put CSI back up by 12.  With two and a half minutes to play, JJC’s Korede Griffith narrowed the lead to five, 77-72 after a great steal and lay-up, but CSI had another answer via a free-throw by Schettino followed by a turnover and lay-up from Fonseca.  Two more Fonseca freebies gave CSI a double-digit lead.

From there, most of the final 90 seconds was spent with JJC fouling and CSI answered the call by making 13 of 17 free-throws all in the final two minutes to secure the win.  JJC, meanwhile, scored 9 points in the final 35 seconds, many of the points uncontested to draw closer by the end.

CSI shot a robust 55.6% from the field, and 68.9% from the line, both season highs.  They were led by Fonseca’s 26 points and 13 rebounds.  Schettino dazzled with 19 points, 13 assists, and six rebounds, while Delahanty finalized with an even 15 points and 10 boards.  Darell Robinson finished with a team-high 21 points, while Jesse Higgins tallied 20, and Griffith, 19.

CSI will now be idle until their 13th Annual Tournament of Heroes, which will take place on December 28-29 at the Sports & Recreation Center.