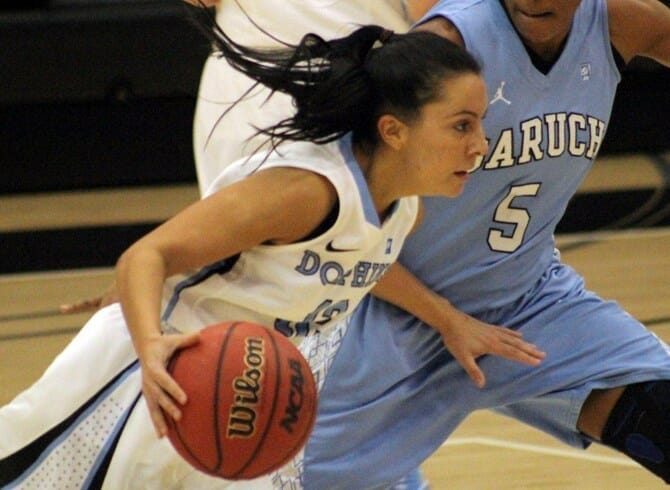 The College of Staten Island women’s basketball team was ice-cold from the floor for the second game in a row as they fell to Baruch College tonight 75-60.  With the loss, their second straight, the Dolphins fall to 3-5 overall and 1-1 in the CUNYAC while the Bearcats improve to 3-3 overall and 2-0 in the CUNYAC.

The Dolphins could not get anything going on early in this game.  Baruch’s defense was aggressive in the first half which lead to 15 turnovers by the Dolphins, 10 of which the Bearcats were able to converted into steals.  Baruch was dominating the paint, scoring 26 of their 36 first half points from close range and the Dolphins couldn’t seem to figure out the right formula to stop them.

CSI came out in the second half looking like a completely different team early on as they were able to increase their shooting percentage from a measly 29% to 39%.   The Bearcats led by 13 points before CSI was able to go on a 7-0 run to reduce the Baruch lead to just six.  The Dolphins were unable to continue their hot streak from the first part of the second half as the Bearcats would take the game back over and extend their lead back to double digits.

The Dolphins had no answer for the big four seniors from Baruch as they all scored over double digits and two of them (Sheridan Taylor, Alicea Ulmer) each had double-doubles as they 16 and 13 rebounds respectively.

Victoria Crea and Ashley Iannacone each poured in 9 points for the Dolphins while Nikki Fabozzi grabbed a team high eight rebounds.

CSI shot just 8-14 (57.1%) from the free throw line in tonight’s game compared to the Bearcats who cashed in with their chances as they went 15-19 (78.9%).  Baruch’s aggressive defense was effective tonight as it led to 16 steals and forced 24 turnovers.

The Dolphins heavily relied on the three-point shot tonight as they took 27 three point shots compared to just 8 for the Bearcats.  When those shots are falling for the Dolphins they are very hard to beat but they have very unlucky as of late and hope that their luck will turn around soon.

The women are back in action on Thursday, December 11 at 5:00 pm when they travel to New York, NY to take on John Jay College in another CUNYAC matchup.