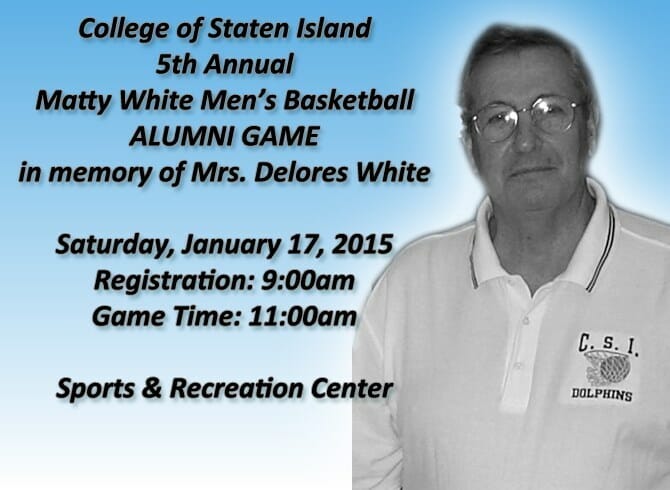 Celebrating the legacy and memory of late-assistant coach Matty White and his late-wife Delores, the College of Staten Island is getting set for its 5th Annual Men’s Basketball Alumni Game at the Sports & Recreation Center tomorrow morning.  Registration begins at 9am, with tip-off scheduled for 11:00am, preceding CSI’s doubleheader against CUNYAC-rival Medgar Evers College. The event is used as a fund and friend-raiser for the program with all proceeds generated supporting the program in the name of late assistant coach Matty White.  It features a competitive game between men’s hoops alumni and a full luncheon overlooking the men’s game vs. the Cougars at 1pm. In a neat twist this year the Alumni Game will be televised live via CSI SportsNet at www.csidolphins.com/watch.

The event will feature a full game played before CSI men’s and women’s doubleheader tip-off vs. CUNYAC-rival Medgar Evers College, beginning with the men’s game at 1pm.  Alumni will be provided with complimentary game jerseys and a full luncheon, and official CSI basketball apparrel at the conclusion of the event.  Registration is $60 with all proceeds generated assisting the men’s basketball program.

An assistant coach for the Dolphins for 17 years, coach White lost his battle with kidney cancer in May of 2010, he was 74.  In a dedication ceremony prior to tip-off in 2011  members of the Alumni presented the White family with a commemorative plaque dedicating the event in future years be officially renamed the Matty White Men’s Basketball Alumni Game.  Delores White passed away this past offseason but has been a constant figure surrounding the program for many years.  Both of their legacies will be celebrated on Saturday.

“Coach White never played at CSI, and you won’t find his name in the record books here for coaching either, but what he meant to our program is immeasurable, and Delores was just as vested in our student-athletes and the program in general” said Associate Athletic Director David Pizzuto, who has helped organize the event.  “For the alumni to dedicate this day to the White family is a strong indication of just how valued he was and how he and Mrs. White was embraced by the CSI family.  There is no one more truly deserving.”

Those wanting to register for the event can contact Petosa or  Pizzuto at (718) 982-3169/3166.  Walk-up registration is encouraged and will take place beginning at 9:00am at the Sports & Recreation Center on January 17.  Lunch tickets only are available at $10.