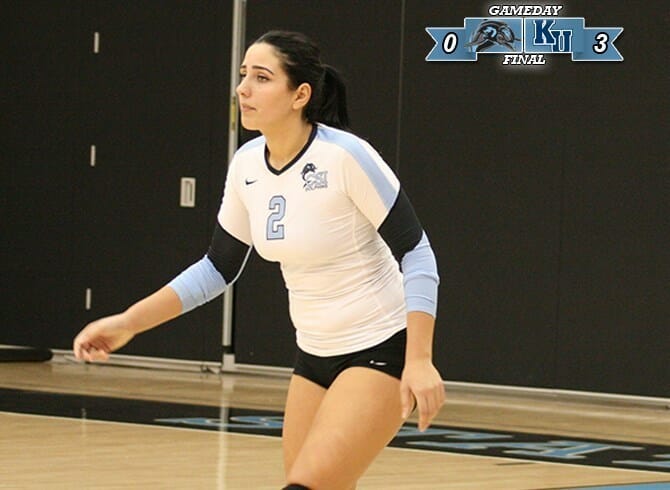 A Brittany Minondo service ace got things started for the Dolphins in the opening set, but six straight points by the Cougars gave the home team control and they hardly relented.  Three kills by Vikki Stec gave Kean a commanding 17-4 lead in the opener, and the team was on cruise control from there.

In the second frame, a kill by Selma Kolenovic helped CSI to a 2-2 tie early on, and then an ace by the senior made it 6-4 later.  The Cougars, however, then went on a 6-0 run, sparked by two Lisa DeGroot service aces.  A Kolenovic kill later in the stanza tried to get CSI back into things but by then Kean had another double-digit lead and went on to the 25-12 win.

In the final stanza, three kills each by Julia Fiore and Myiah Gatling kept CSI at bay most of the way, as the Cougars built an early 12-2 lead en-route to the 25-11 win.

Calli Scheurmann led all scorers with 10 kills for Kean, and was followed by Stec’s seven kills.  Kendall Stonico led the way with 14 assists while Juliana Romero pieced together eight digs.  CSI was led by Kolenovic’s four kills, and Minondo finished with a team-leading 9 assists.  Victoria Wong led all scorers with 10 defensive digs.  Kean held a huge, 35-11, advantage in kills in the game and connected on .305 percent of attempts.

The win by the Cougars lifted them to 4-0 all-time against the Dolphins, and CSI suffered their 13th opening day loss in the past 14 years.  CSI will next play a week from tonight as part of their home opener at the Sports & Recreation Center at 8pm against Yeshiva University.