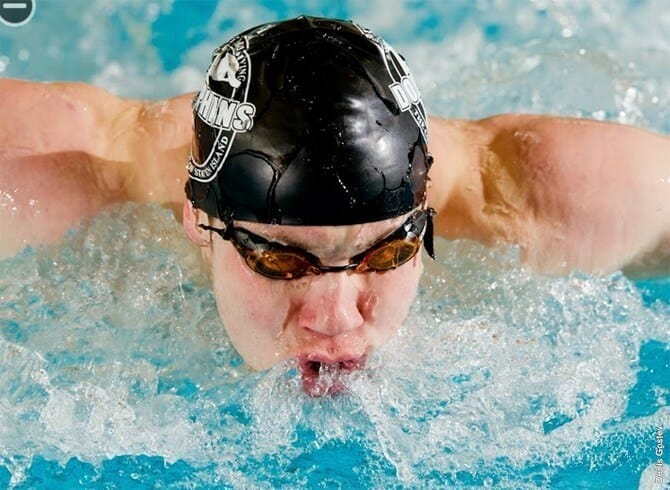 The College of Staten Island Men’s Swimming & Diving program ended a CUNYAC Championship season with another successful weekend installment at the Metropolitan Conference Swimming & Diving Championship held at Rutgers University in Piscataway, NJ.  The meet, attended by colleges spanning all NCAA Divisions, showcased CSI student-athletes at every turn, and the Dolphins finished 9th overall and tops among their CUNYAC brethren.  It was a fitting end to a championship campaign.

Like they have been doing through much of the season, CSI set the course on a record-breaking weekend in New Jersey.  Alongside finishing tops among CUNYAC schools, the Dolphins finished ahead of usual dual meet opponents and NCAA Division II Queens College, Pace University and Adelphi University and local regional power William Paterson University.  CSI sophomore Tim Sweeney broke his own record in the 500-yard Freestyle event, racing in at 4:46.98, taking 23rd overall.  He would swim to a seventh-place finish in the 100-yard Butterfly with a time of 50.97, and a fifth place finish in the 100-yard Breaststroke with a time of 58.44, good enough to make him an NCAA B-cut selection.  That’s a promising sign of things to come for Sweeney, who now owns four CSI program records and is a part of three more CSI relay records.

Sweeney shares two CSI relay records with senior teammate Danila Novikov, who ended a sensational career with three exceptional races at Metros.  The senior placed fifth in the 200-yard Individual Medley, topping out at 1:55.59, and later raced to a 58.44 time in the 100-yard Breaststroke, taking 8th place.  Last, he swam the 100-yard Freestyle, knocking in a 14th-place showing with a time of 47.86.

The fine performance at the Metro championship capped a great 2014-15 run for the team, one that included a back-to-back CUNYAC Championship for the first time in a decade, four new school records and the promise of great things to come.  The Dolphins will graduate five seniors this year, including record-holders Novikov and CUNYAC gold medal diver John Pignatelli, but the advances made by the underclassmen is enough to make Head Coach Michael Ackalitis happy about what is on the horizon.

“The way we ended with the final swims we had; it just makes the future look brighter,” said Acakalitis.  “We hope to bring in more and look forward from here, defending a championship and looking for continued progress in the regional and national scene.”

The Dolphins will be eligible for NCAA Championship competition next year, and the coach is anxious that 2015-16 will hold similar success as the team continues to aim its trajectory straight-ahead.

“Swimming has gotten so fast over the last few years but at the end of the day the NCAA Championship will always be our goal and it is within reach,” the coach said.  “We’ve made some NCAA B-cuts and are targets are to stay at that level and getting to that step.  Our guys are excited and they should be, both by what we have accomplished and by what we can continue to achieve.”

very happy with th repeat and the strong showing in metros we broke five records so it was exciting to end on that and buiold on that toward next year and make a bigger impression in dual meets.

For a complete listing of results from the Metropolitan Swimming & Diving Championships, click HERE.