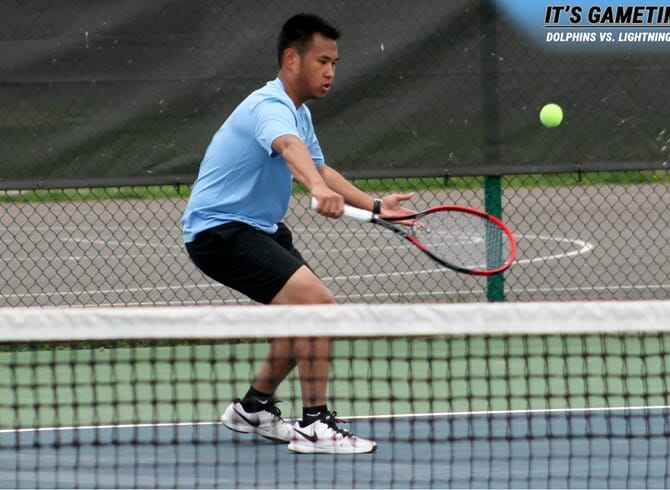 The College of Staten Island men’s tennis team is on a three-game skid, and they are hoping for a chance to turn the tide this afternoon as they continue their CUNYAC slate of games against Lehman College in the Bronx at 12 Noon.  The Dolphins have been idle since Tuesday, having seen their last two matches washed away due to weather.

CSI vs. LEHMAN COLLEGE
Matchup: College of Staten Island (1-3, 0-2 CUNY) vs. Lehman College (3-3, 0-3 CUNY)
Where: Apex Tennis Courts – 250 Bedford Park Boulevard West, Bronx, NY
All-Time Series: CSI leads, 26-6
Last Meeting:  April 8, 2017 – CSI won, 8-1
Players to Watch (CSI): Alex Tsui is still leading the way for the Dolphins despite the team’s overall tough start.  He is sporting a 3-1 overall singles record and is so far 1-1 in conference play.  Matthew Vesci is the other Dolphins player to score a win in conference play as he is 1-1 as well.  David Luo is off to a 2-2 start and is looking to get back in form when he started the season with two-straight wins.  Two CSI duos are undefeated this season having paired off once so far this season.  Raymond Hwang and Luo have teamed for one of those wins and Matthew Kotlyar and Tsui is the other team off to a 1-0 start.
Players to Watch (LC): The Lightning are coming off of a solid, 7-2 win over St. Joseph’s College of Long Island.  Scoring wins in the No. 1 spot was Michael Forte, who won by identical 6-0, 6-0, scores.  Jason Strudwick at No. 2 scored another victory while Won Sik Park was a winner at No.4.  Strudwick and Rich Williams were overpowering and have been crisp in the top Doubles spot, so look for them to want to stay hot against the Dolphins.
News & Notes:  After losing to the Lightning in 2016, CSI got back on the winning side of the rivalry last year with an 8-1 win at home.  CSI had won 10-straight in the series before Lehman’s win in 2016.  Overall, the Dolphins have won 26 out of the 32 overall meetings and are 11-2 all-time on the road against Lehman in the Bronx.  Lehman is still looking for their first CUNYAC wins of the season, having dropped games to Brooklyn College, Hunter College and Baruch College.  CSI suffered 8-1 losses to both Baruch and Hunter, while Lehman lost both of those matches by identical 9-0 scores. CSI, meanwhile, is trying to avoid its first 0-3 CUNYAC start since 2005, when they finishes 2-12 overall and 1-7 within the conference.