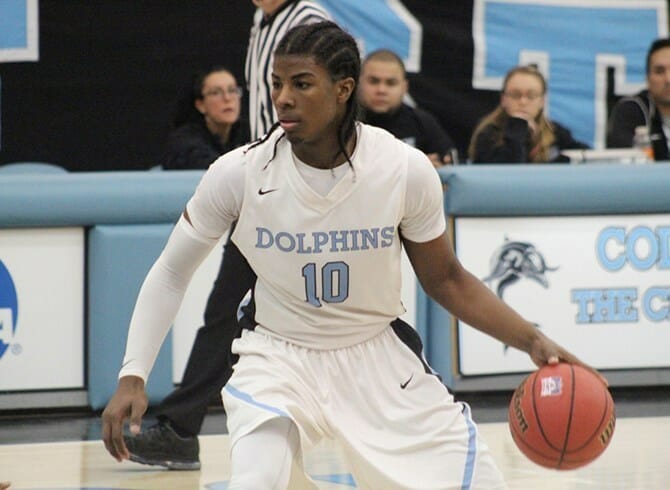 For the second consecutive year the College of Staten Island men’s basketball season ended at the hands of York College, only this time it was as part of the CUNYAC/Con Edison Postseason Championship Tournament Quarterfinals, falling 70-67 at the Sports & Recreation Center.  It was a see-saw game the entire way and the Dolphins had their chances but the Cardinals weathered a late flurry to score the win, improving to 14-12 overall and advancing to semifinal play.  The Dolphins’ season is over for now at 17-9, and the team will await word on a prospective ECAC Postseason bid at the close of the month.

In a game that featured eight ties and 9 lead changes, CSI bounced out to a 10-2 start, fueled by a pair of Will Fonseca baskets.  In a recurring theme of the night, York battled back with an 11-2 run to take a 13-12 lead at 13:09, fueled by a trio of three-pointers and then a dunk by Jaron Williams.  CSI would score the next blow, a 13-4 run over the next three minutes, as Vincent Dacunto fished in a pair of three’s.  York responded with a 9-0 answer, and so it went in the first half until ultimately, CSI nursed a thin, 35-32, edge at intermission.

Although both teams shot the ball well, the teams went through a lull in the opening minutes of the second frame, and CSI especially became turnover-prone, fumbling it over six times in the opening seven minutes of the second stanza while only taking four shots.  The dry spell helped York score a 14-2 run over six minutes, going up by their biggest margin, 51-43, with just over 10 minutes to play, helped by seven Cyril Reid points.

CSI refused to go down quietly and came alive from there, going on an immediate 10-0 run over the next two minutes, again fueled by a pair of Fonseca lay-ins and a three-point play by Khari Rollock.  Williams answered with a three-point play of his own for York, swinging the lead back in York’s favor and setting up for a wild finish.

At 6:10, a Frank Schettino jumper gave CSI a 57-56 lead, but it would prove to be their final one of the game.  Williams tallied a pair of free-throws to take back the lead, and two more baskets by the senior extended York to five, 62-57 with 2:12 left.  With 1:05 left things looked bleak for CSI when a pair of Williams’ freebies gave York a 66-60 lead, but CSI had room for one more surge.

Will Fonseca canned a three from the top of the circle with 55 seconds left, and after employing a press, York turned the ball over and Schettino went right up with a lay-up to cut it to 66-65 with 51 ticks to go.  The Cardinals turned the ball over yet again and CSI had possession.  With the shot clock winding down, Rollock would miss a baseline jumper and the long rebound led to a fast break layup for Williams to give the visitors a 68-65 lead with just 11 seconds left.  Down to their last possession, CSI would not get off a shot.  Instead, Fonseca was fouled in the backcourt, and in the double-bonus, Fonseca sunk both free-throws to make it 68-67 with seven seconds to go.  CSI immediately fouled, but Terell Roper buried his freebies and down to their final shot with no timeouts to spare, Schettino would have a three blocked by Roper as time expired.

CSI connected on 51% of their shots (26-51) but were careless with the basketball, turning it over 18 times and finishing a minus-9 in the turnover differential column.  Fonseca led all Dolphins with 20 points and 10 rebounds, while Schettino settled with 17 points and eight assists.  Williams finalized with a game-high 29 points and 11 rebounds for York, while Reid ended his day with 13 markers and seven rebounds.  CSI finished just 11-of-17 from the line, while York converted over 70% on their end, sinking 19-of-27 freebies.

For the Dolphins, who made it all the way to the CUNYAC Final four years in a row, the loss in the quarterfinals is their first since 2009-10, and their first at home since 2007-08.  CSI continues to lead the all-time series with York, 60-24, but York has now won the last three meetings in Tournament play, and CSI boasts just a 6-5 record against them all-time in CUNYAC tourney play.

For now, CSI will sit tight and await word on a potential ECAC Metro NY.NJ Postseason selection.  Those selections will be made on Monday, March 2.