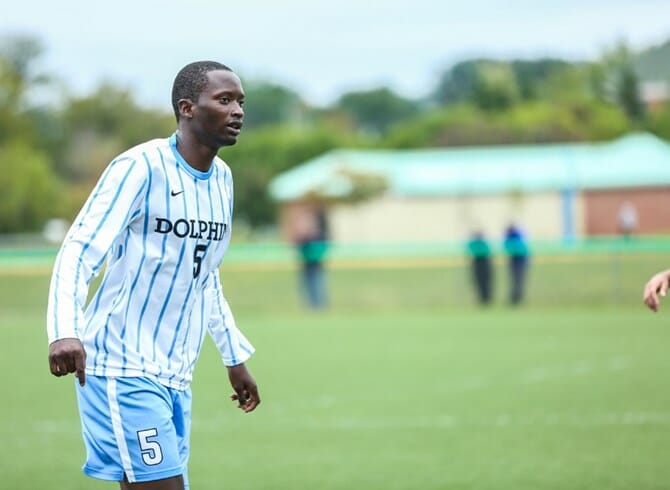 William Paterson skated by Moravian College yesterday via a penalty kick shootout, and they won another via the penalty spot today, as the Pioneers slid by the Dolphins, 2-1, as part of the ECAC Region 3 Final at Ramapo College.  The even game came down to the controversial late call with 53 seconds remaining, and Darwin Cruz calmly hit the low corner for the game-winner.

Penalty kicks were a theme in the entire tournament so far.  The Dolphins scored the lone goal in a 1-0 win over Ramapo via a penalty shot 13 minutes into their semifinal, while Paterson’s game came down to kicks after 110 scoreless minutes in theirs.  That set the stage for this afternoon’s title tilt.

Before the fated shot, the score was only tied for 29 seconds before the Dolphins got on the board.  Marcin Klim caught a Mohamed Ndao feeder and raced in to beat WPU keeper Ryan Quigley on the first shot of the game, shocking the No. 2 seeds and giving CSI the early advantage.

The lead would hold until the half.  Both teams had their chances although they were limited. A pattern was also forming with fouls.  Just 25 minutes into the game the Dolphins were flagged with three yellow cards to Ilir Papraniku, Ndao, and a bench yellow.  CSI, however, stayed the course, only allowing a harmless shot by WPU’s JP Gonzalez to sail wide in the final 15 of the frame.

It was clear to start the second half that the Pioneers were on a mission to equalize and it did not take long.   After both teams traded shots that went wide, WPU leading scorer Keysean Brant-Sharp registered his seventh goal of the year, turning on a shot just 4:47 into the stanza to equalize.

Both teams then measured their opportunities, but the fouls kept coming.  CSI was whistled for three more to Paterson’s none, and Ruben Diaz got hit with a yellow at 51:56.  Two minutes later, Chris Li got hit with a yellow, making five for CSI.  A now tempered CSI unit had to wait until the 86th minute to get a quality scoring chance, as Ryan Layman sent one on goal that was parried by Quigley.

William Paterson had got without a shot since the 71st minute when they got the opportunity they were waiting for.  A turnover at midfield sprung Andre Michalec down the right wing, blowing by CSI defender Eric Conde.  CSI senior Jacob Szumanski sprung into action, executing what seemed to be a perfect sliding tackle that sent the ball out past the goal line.  But Michalec fell over Szumanski on the tackle and it prompted the official’s whistle.  The Dolphins pleaded their case but were flagged for another yellow card, their sixth and to no avail Darwin Cruz lined up the shot.  After a lengthy delay, Cruz tucked one into the low corner to keeper Jake Foeldes’ left side with 53 seconds left to seemingly put a ribbon on the afternoon.

The CSI unit then lost its cool, and on the ensuing possession, sophomore Ali Fares was sent off via a red card for two hard tackles in the midfield.  Just a few dribbles later, the game was over, sending WPU to the ECAC national championship next weekend and finalizing CSI’s season at 12-8-2.

William Paterson led the final shot tally, 11-9, although CSI held a 5-4 edge in shots on goal.  The Dolphins also held a 4-1 edge in corners.  Not counting the bookings, CSI was whistled for 11 fouls to WPU’s eight.

The Pioneers improved to 9-8-3 with the victory, and 3-0 all-time against the Dolphins.  For CSI it was their first ECAC Regional Championship appearance.  They fell to 2-6-1 all-time in ECAC Postseason play.