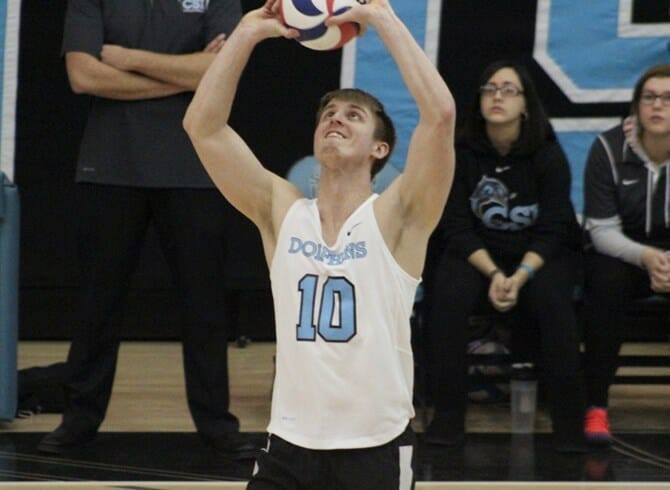 CSI started off strong with the 25-19 set victory however the Bears made it close towards the end of the set despite the Dolphins being up 10-5 early in the set. St. Joseph’s was able to whittle down the Dolphins lead to just two before CSI was able run away with the set.

The Bears used the momentum from the end of set one to carry them into set two where they were able to jump out to an early lead. The Dolphins were able tie it up at 14 midway through the set and didn’t turn back at that point and would go on to win 25-21.

The third and final set the Dolphins dominated early before the Bears made a surging comeback to tie the score at 6.  CSI was searching for their second win in program history and refused to let the Bears back in the set.  The Dolphins went on a 9-0 run that shut the door on the Bears as they would go on to win the final set 25-15.

Mark Palencia led the Dolphins with 11 kills and a .207 hitting percentage.  Philip Szumanski had a career high 33 assists in the win while Brian Sheydvasser led the way with 11 digs.  Justin Edwardsen also had a solid outing for the Dolphins with 10 kills on 19 attacks for a .316 hit percentage.

The Dolphins are back in action on Wednesday when they travel to the Bronx, NY to take on Lehman College in their third CUNYAC game of the season.