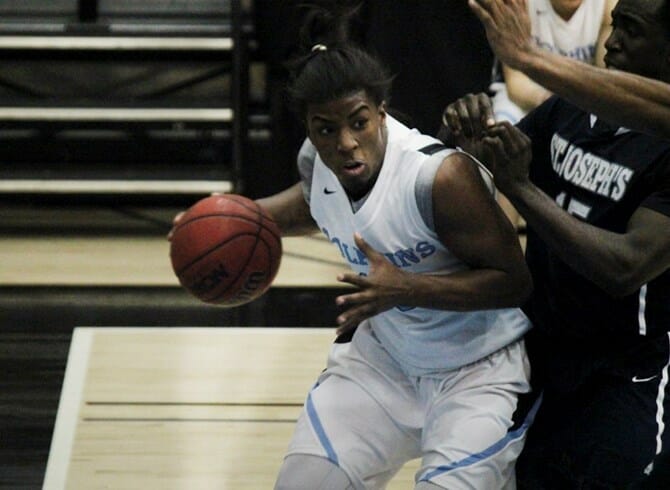 The College of Staten Island men’s basketball team won for the 10th time in their last 11 games, powering to a big, 82-54, win over Medgar Evers at the Cougars Cave in Brooklyn, NY.  The Dolphins got huge production from their brightest stars, and held the Cougars to under 30% from the field, lifting their mark to 17-6 overall and 11-3 within the CUNYAC, while the Cougars fell to 3-20, 2-12, respectively.

Despite the final result, it was the home Cougars that got out to a flying start, getting out to a 10-2 lead in the first 3:22, helped along by three Dolphins turnovers and the hot shooting hand of Matthew Walker.  The Dolphins, however, steadied the ship, and powered back to the tune of a 15-2 run that featured 10 points from Will Fonseca, which included a three-point play and a three from behind the arc.

The two teams wrestled from there, trading physical play, baskets, free-throws, and turnovers.  After a pair of ties, A Kyle Sierra bucket gave MEC a 26-25 edge, but seven straight made free-throws by the Dolphins, coupled with a Greg Civiletti lay-up, gave CSI a 37-28 lead at the break.

As fast as the Dolphins ended the first frame, they came out blazing in the second, jumping out to a 12-5 run to break open the game.  Will Fonseca continued his hot hand, scoring eight points in the run, part of his team-high 34 on the night.  After scoring just three points in the first half, Frank Schettino erupted for 16 second half markers, extending CSI’s lead to 20, 59-39, with 9:49 to go.

The Dolphins finished the lead on a 9-2 run, eventually winning by 28 in a game in which they led by as many as 30, their biggest win of the season.  On top of his point total, Fonseca scored a career-high 19 rebounds as well, while Schettino finished with a double-double as well, with 19 points and 11 assists.  The Dolphins shot 46% from the floor, while connecting on 26-of-32 free throws (81%).  MEC’s Reynaldo Eloy finished with a team-high 17 points, while Walker settled with 13.

CSI is back in action on Friday, traveling to Baruch College in their next-to-last game of the season, with tip scheduled for 7:30pm.