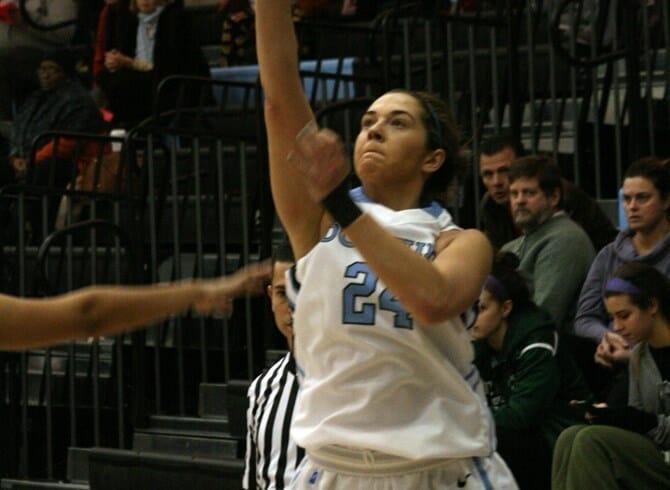 The College of Staten Island women’s basketball squad rolled through their most lopsided win of the season tonight, scoring a one-sided, 94-34, victory over Medgar Evers at the Cougars Cave in Brooklyn, NY, as part of CUNYAC play.  The Dolphins won for the 9th time in their last 10 games, improving to 14-9 overall and 11-3 in the CUNYAC, while the Cougars fell to 1-22, 0-14, respectively.

It was all CSI from start to finish tonight, as the Dolphins used a numbing 17-0 run to open the game’s first 6:46.  Christina Pasaturo scored 9 of CSI’s first 11 points, while Victoria Gallinaro scored the final six points of the opening run.  From there, CSI sailed, shooting 57% in the game’s first half, while holding the Cougars to 36% and forcing turnover after turnover.  Senior Megan Myhre caught fire knocking down three’s on three consecutive trips down the floor at one point, opening up CSI’s lead to 30-6 after the first 10 minutes.

CSI took a 51-22 lead into the locker room, emptying their bench by that time.

All but one CSI player hit the scoring column tonight, with Myhre leading the way with 24 points on 9-11 shooting, including a 6-8 clip from beyond the arc.  Pasaturo dumped in 16 points in just 16 minutes, while Gallinaro finished with 14 points and a team-high 5 assists and seven steals.  MEC, which shot just 29% on the night, was led by Nia Tompkins’ 17 points off of the bench on 6-19 shooting from the floor.

CSI will next take to the road against Baruch College on Friday night at 5:30pm in their next-to-last regular season game before the CUNYAC Postseason Tournament, which begins on February 21.