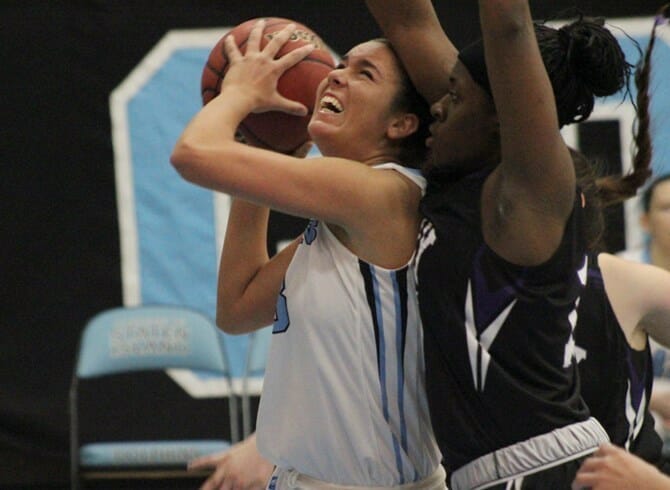 For the first five minutes of the game neither team could get a foothold as the lead kept going back and forth.  CSI dialed in with 14:28 remaining in the first half when Victoria Gallinaro drained a three-point shot to give the Dolphins a four point lead. CSI didn’t let off the gas pedal and continued to pour in the buckets which turned into a 10-0 run with support from each player on the court.

Samantha Flecker has been making an impact as soon as she enters the game all year and tonight was no different as she was able to find her way into the paint and score an easy layup as soon as she got into the game.  Christina Pasaturo has been the go to player all season for points however, tonight was just not her night.  Pasaturo didn’t record a point until the 9:09 mark when she drained a deep three pointer assisted by Megan Myhre.

Pasaturo refused to give up and it started to show towards the end of the first half when she didn’t let the missed shots faze her and she kept driving to the rim which garnered her four more points before half time two of which came at the buzzer.

At the half the Dolphins headed into the locker room with a 37-26 lead.  CSI edged out CCNY in the paint in the first half 18-8 while scoring 10 second chance points.

In the second half the Dolphins started to pull away due to several turnovers by the Beavers.  CCNY finished the game with 26 turnovers due to a stout Dolphins defense.

Nikki Fabozzi finished the game with 10 points and 13 rebounds the only player who outscored her was Pasaturo who finished strong in the second half with 12 points and 11 rebounds.

CSI is back in action on Friday when they head to York College for another CUNYAC clash.